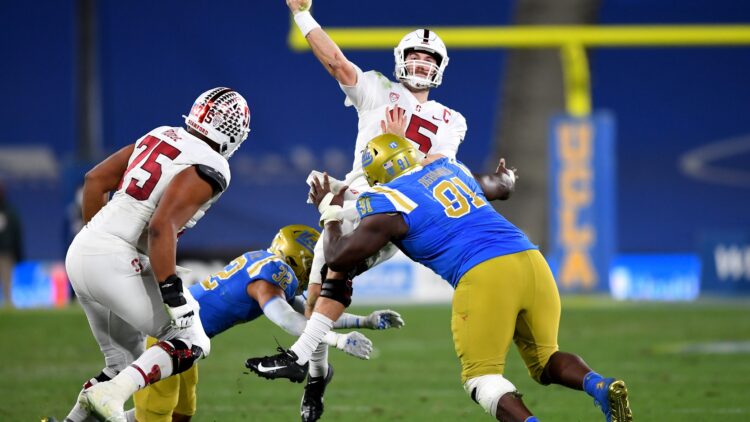 It’s probably rough being a Houston Texans fan right about now. The Deshaun Watson situation just gets worse by the day, J.J. Watt is out of town, and they didn’t have any picks in the first two rounds as the Laremy Tunsil trade begins showing its aftereffects.

The good news? Well, they are probably the favorites to get the first overall pick in the 2022 draft. Other than that, things look pretty bleak right now. Houston made their first public acknowledgement that Deshaun Watson may not be playing there this fall. Despite all the holes all over their roster, they opted to spend their first pick (albeit still a third-rounder) on quarterback Davis Mills.

Mills is not exactly the ideal guy to be starting week one of his rookie year, unless he cleans up a lot of his tendencies. Even still, he has potential to be a decent player down the road. At Stanford, Mills only saw the field for 14 games, so he is a very raw prospect. His arm strength is great, but he gets very erratic with placement and timing. He leaves balls behind receivers and can hesitate when pulling the trigger on throws.

Houston did find some promising targets for Mills to throw to as well. Nico Collins is a big target with reliable hands. He isn’t going to blow defenses away with his speed, but he makes up for it with superb route running and physicality. On the other hand, Brevin Jordan may be listed as a tight end, but he is one of the fastest players you will see at the position. He virtually does nothing in pass blocking, but he is another wide target that brings an addition of great breakaway speed. Both players may end up seeing a large role in the offense right away.

Houston didn’t have a ton to work with here. The Tunsil trade reared its ugly head at the worst possible time, leaving the Texans with little assets while simultaneously needing to fill a ton of holes. In a vacuum, the organization did the best they could. If you take into account the scenarios that got them there, they put a lot of this on themselves.