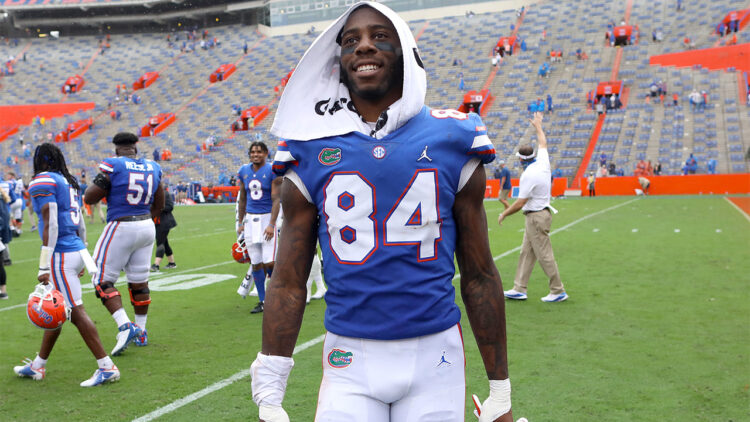 This article was originally posted on our sister site Franchisetagged.com and is by writer Jared Barsness. You can find the original article Here.

It’s April, which means one thing for NFL fans across the world, the draft is near. An exciting event for many people as they look forward to seeing which college players will be on their favorite pro team next season. As usual, there is a lot of talent in this draft at a number of positions, and it will be very exciting to see what needs are addressed by each team throughout the event. For this first mock draft, I want to see what would happen if every team stayed in the current position, so there will be no trades made (other than those already made). Let’s dive right in!

After making it all the way to the 2017 AFC Championship Game, the Jaguars find themselves in an all-too-familiar spot, at the top of the draft, and in this case, with the very first pick. With that pick, I have them drafting their QB of the future and potential generational talent, Trevor Lawrence. He could be the spark that brings the dreadful Jags back to relevance.

The Jets traded their former first-round QB selection in Sam Darnold to the Carolina Panthers, leaving them a void to fill. While the thought of going to the New York Jets may be a frightening one to any QB, and rightfully so, there is a whole new regime in the Meadowlands that could turn around the franchise.

The 49ers traded a boatload to get up to pick number 3, including their first-round pick for 2021, 2022, and 2023, and it’s hard to imagine they did so with the intention of taking any position but quarterback. It’s no secret at this point that Jimmy G’s days are numbered in Santa Clara, and Mac Jones could be the guy to get San Francisco back to the NFC title game.

There’s a really good chance that the Falcons trade out of this spot. They have no need that requires a pick this high, so they would be better off trading out, but for the sake of this mock, I have them taking Kyle Pitts. Pitts is a monumental talent that we have seen nothing like in a long time, maybe even ever. He’s 6’5” but does not move like it. He’s very mobile and isn’t a bad blocker either. He can really be used as a wide receiver if the team wanted to.

Joe Burrow just suffered a devastating injury, and the Bengals’ offensive line is pretty awful, to say the least, so it’s crucial that they protect their QB of the future. To do so, they should look no further than Penei Sewell, who is essentially the consensus best tackle in the draft.

Chase was one of the best wideouts in college football back in 2019 when LSU took home the National Championship. He racked up a whopping 1780 yards and 20 touchdowns that season and would make a great addition to the Dolphins wide receiver corps.

Waddle was hampered by an ankle injury last season, but assuming he makes a full recovery, could easily be WR1 for many NFL teams. He’s also a solid return man. The Lions desperately need to address this position after the departure of Kenny Golladay and Marvin Jones Jr.

The Tide doubles up with two straight players being drafted. There’s a lot of back and forth on which corner is the best this year, but I have Surtain at CB1 at this point. The Panthers’ secondary could use a bit of help and having Surtain playing opposite Donte Jackson could be a deadly combination.

It’s no secret that Drew Lock has had his struggles in Denver, and it seems impossible for the Broncos to pass up on a guy like Fields if he falls to them. He could revitalize that Broncos offense with those young weapons.

It’s been a bit since the Cowboys had a good secondary, so cornerback seems like the most logical pick here, especially when it’s a guy like Jaycee Horn, whom many have as the best corner in the draft. The son of Saints legend Joe Horn ought to do his father proud, even if it isn’t in black and gold.

Another highly debated position is the edge rushers. There are a lot of guys that could go here, but Jaelan Phillips is my guy right now. A combination of Phillips and Leonard Williams could be a real game-changer for the Giants.

The Heisman Trophy winner head to Philadelphia, where Alabama QB Jalen Hurts seems set to take over as the starter in 2021. They skipped out on Justin Jefferson last year and I can’t see them skipping out on Smith this year.

There have been some concerns about Slater’s ability to play tackle at the next level, but no matter what, he should be a solid offensive lineman and deserves a shot at tackle. The Chargers are in desperate need of offensive line help too.

Speaking of needing offensive line help, the Vikings haven’t had a really good one in many years, and it’s time that they address it, as Kirk Cousins was one of the most frequently pressure QBs in the league last year. Give a decent line, Cousins thrives, but Minnesota has failed to give him that, and Darrisaw is a step in the right direction.

The Pats need a new QB because Cam Newton isn’t the guy. Trey Lance was outstanding with North Dakota State. The primary concern with him is that he has gone against primarily FCS schools, but he has done exactly what a first-rounder should do against said schools by making light work of them. Belichick may land his new QB of the future with this pick.

The Cardinals need cornerback help, especially with the departure of Patrick Peterson. Caleb Farley is the best corner available at this point and could help strengthen a weakened Arizona secondary.

There’s a very good chance that Parsons goes earlier than this, but linebacker just isn’t a big need for a lot of teams, and he carries some question marks with him. The Raiders’ defense has been their biggest weakness for some time now, so adding the best linebacker in the draft seems like a pretty logical move here at 17.

The Dolphins shore up their defensive line by taking Azeez Ojulari. Christian Wilkins has struggled in his first two seasons on the team and Ojulari could be an immediate upgrade from him.

Washington has a pretty talented roster all around, but the most important offensive line position left tackle, still has a question mark on it. Cosmi could fill that spot and provide Washington with a solid tackle duo with him opposite Morgan Moses.

The Bears’ offensive line has been pretty rough for a bit now, and right tackle is a need for them. Jenkins fills that need, and he should fill it pretty nicely.

Northwestern boasted a pretty intimidating defense last year, allowing the fifth-fewest points per game, and Greg Newsome II played a big role in that. The Colts really only have one reliable cornerback on the team in Xavier Rhodes, who also happens to be on a one-year contract, so they need to address this spot.

The Titans have emerged as one of the biggest threats in the AFC in recent years. With the departure of Corey Davis, who had a breakout season in 2020, the Titans need to fill those shoes. A combination of Bateman and A.J. Brown would make for a very strong duo for Ryan Tannehill.

Kwity Paye is a very talented edge rusher that has the potential to go much earlier than this. The Jets would be getting themselves a steal by taking him at 23 and would instantly strengthen their defense.

The Steelers tried to fill the shoes of Le’Veon Bell with James Conner, and it’s safe to say Conner just isn’t a starting running back in the NFL. Najee Harris on the other hand absolutely has that potential. It’s hard to believe he’s even human sometimes with the things he does.

Every time I watched TCU this past season, I always found myself watching Trevon Moehrig because he’s just such a good player. The Jaguars’ safety room is pretty poor right now and Moehrig would be a day one starter for them.

Christian Barmore is a big man and a strong man who excels at rushing the passer from the inside. He always stood out on the Alabama defense and should give opposing QBs nightmares when he gets into the league.

Like Alabama, LSU’s wide receiving corps has been outstanding as of late. Lamar Jackson desperately needs some receivers, and while Sammy Watkins is in Baltimore now, that’s not enough.

The Saints lost a ton of talent this offseason and it will likely take time for them to rebound. Owusu-Koramoah is a step in the right direction of the defensive side of the ball. He excels in pass coverage and even took many snaps in the slot this past season. His pass-rushing could use some work, however, so that’s one thing to watch for with him.

The Packers have neglected to address the wide receiver position for far too long, and it’s time that Aaron Rodgers gets a true WR2. Toney also doubles as a good return man.

Devin Singletary isn’t bad, but it’s hard to see him as an RB1. Etienne absolutely has the potential to be the Bills’ RB1 for the foreseeable future and can be used as an every-down back.

The Chiefs’ offensive line underwent some major changes as they cut both of their starting tackles, and there’s no way to don’t do something to fix that position. Patrick Mahomes is being paid way too much to not be properly protected.

Alijah Vera-Tucker is a really interesting player here. He played left tackle in college, but his size may prevent him from doing so in the NFL, and is widely considered as a guard prospect. With that said, he is a very athletic offensive lineman and would be very helpful as the Bucs gear up for another Super Bowl run.