Boston College is a Team to Watch This Season 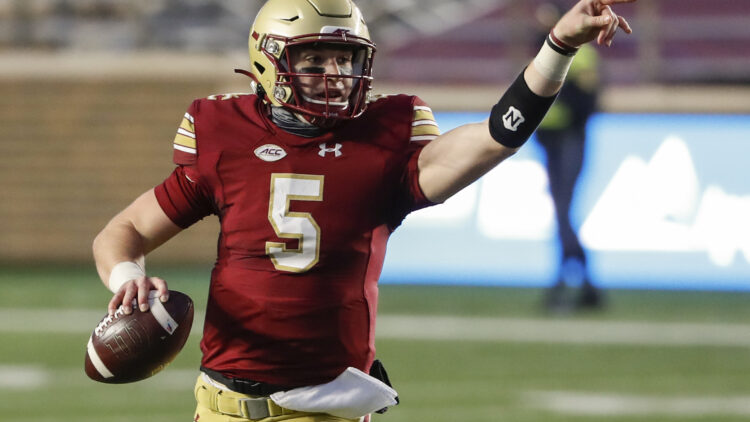 The ACC is full of contending teams and 2021 Heisman favorites from Sam Howell and UNC to D.J. Uiagalelei and Clemson. That said, there is another team that may be set to enter the fray in 2021. After a surprising 6-5 campaign in 2020, including a near win against Clemson, Boston College may be on the road to a top-25 season in 2021.

Now before we go further into this, let’s get something straight. Boston College is not going to win the ACC this season. There is just too much competition, and they are not nearly complete enough as a team. They will be an incredibly fun team to follow, though. Head coach Jeff Hafley has come into the Eagles program and for the first time in years, they look poised to break out of mediocrity. In fact, it is not unfathomable that Boston College has its first double-digit win total since 2007.

The biggest reason for the program’s path towards success is the duo of QB Phil Jurkovec and WR Zay Flowers. Jurkovec, a transfer from Notre Dame, had a very impressive first season as a starter. The redshirt sophomore completed 61% of his passes for 2558 yards with 17 TDs compared to just five INTs. He also rushed for 150 yards and three additional TDs.

As for Flowers, he is on track to be on of the best wide receivers in the entire country this season. The sophomore caught 56 passes for a team-high 892 yards and nine TDs in 2020. His nine receiving touchdowns were also good for first in the entire ACC.

Both Jurkovec and Flowers should be on track for improvement in 2021, but Jurkovec has potential to be an incredible quarterback. His arm strength is great, and while he is mobile enough to scramble, he does not put blinders on while he runs. More often than not a scramble leads to a throw rather than a run, hence the low number of rushing yards.

Jurkovec had some mistakes you’d expect from a first year starter, but they were minor. Occasional missed receivers and questionable throws in coverage were among these problems. However, Jurkovec is a prototypical gunslinger who is not afraid to make big throws when needed. With that in mind, it’s even more impressive that he ended his first starting season on a new team with just five interceptions.

Boston College does have its flaws, though. While they improved drastically in 2020, the defense is still middle of the pack. They have a ton of continuity with nine starters returning. However, the two departures are Isaiah McDuffy and Max Richardson; the team’s two leading tacklers. They will need new players to step up, but with such a contingent unit, they should continue their upward trajectory.

The Eagles’ defense isn’t their biggest issue, though. The offense was very pass-reliant, and they averaged just 101 rushing yards per game. Not only that, but their top rusher, David Bailey, has transferred to Colorado. While a lack of a run game may add to the entertainment value with this offense, it’s still a problem to fix. They will need someone to step up in order to keep defenses honest this year.

Incoming freshman Xavier Coleman is someone to watch. He took a ton of first-team snaps in BC’s spring game, and he earned praise from Jurkovec. The QB was very impressed by the early enrollee’s versatility in both the running and passing games, something that power back Bailey never really had. While Coleman may not be the official starter when the season begins, I would expect him to have a big role in the offense almost immediately.

Not only should this team be better in 2021, but their schedule is undoubtedly easier. BC drew four top-25 matchups in 2020, including two top-five games against Clemson and Notre Dame. This year begins much easier with four out of conference games, and it’s very reasonable that they begin the year 4-0 before going to Clemson to begin conference play.

After that, their most difficult games are all at home against NC State, Virginia Tech, and Wake Forest. Because of this I’d expect them to get to eight wins, and as stated earlier, we could see the Eagles break double-digits and even make a New Years Six bowl game. Things will certainly have to break their way in some close games, but it’s a possibility.

At any rate, BC is certainly headed in a great direction. They are a high-flying offense with a very smart coach, and they have extremely talented players with the potential to head to the NFL, perhaps even in early rounds of the draft. Make sure to catch a few of their games this year, especially their conference schedule post-Clemson.