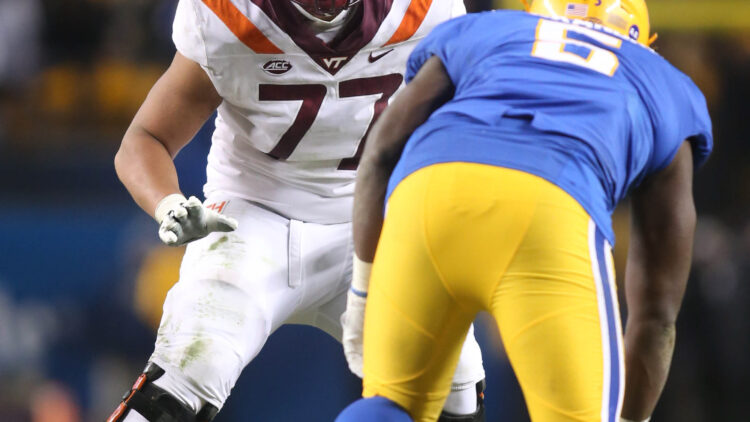 It didn’t take long for Christian Darrisaw to make an impact at Virginia Tech. The offensive lineman earned himself a starting role during his freshman year, and over his three year career he became one of the most impressive OTs in college football.

There are very few areas to knock Darrisaw’s game in terms of his frame or skill set. He carries himself at a nearly perfect NFL size, standing 6’5 and 314 pounds. He also brings an extremely long wingspan that will come in handy at the next level. His lower body creates a great base for his blocks, and that combined with strong arms and shoulders create a devastating blocker.

Darrisaw’s length and lateral quickness are certainly enough to hang with the NFL’s best defensive ends. He is also versatile enough to be effective in either passing or rushing schemes.

His willingness to learn and improve is extremely promising as well. Over Darrisaw’s three years at Virginia Tech, he has greatly improved his blocking technique. He has discovered how to use his massive hands to create leverage in his blocks, and he can manufacture bursts of power to stun defenders.

Darrisaw has also put on 15-20 pounds of muscle during his collegiate career without it affecting his speed and athleticism. Not only does he bring a great combination of talent and work ethic, but his durability should put NFL teams at ease as well. He missed one game during his freshman season, but other than that, he started every game at left tackle for the Hokies.

There is really only one true knock on Darrisaw. While his skill set can create comparisons to someone like a Laremy Tunsil, he has at times lacked an intensity that someone like Tunsil brings to the game. There have been moments where Darrisaw’s competitive spirit has been called into question. He has been known to complete his original blocking assignment and take the rest of the play off rather than stay involved. That said, like many other aspects of Darrisaw’s game, it has improved over the years. In 2020 there were very few lapses for Darrisaw, and he was one of the fiercest linemen in college football. Here is just one example of that intensity:

Christian Darrisaw can come into an NFL team and earn a starting job on day one. He is the type of player that fits into most any scheme, and he could play from either the left or right tackle positions. Even if it isn’t the most seamless fit at the start, his eagerness to improve his game will make it that way over time. His vast experience at the collegiate level gives him an edge as well; he has seen more snaps and situations than most of the other top linemen in the draft. Darrisaw should be one of the first tackles to come off the board.