Could UNC Have Another Top RB in Ty Chandler? 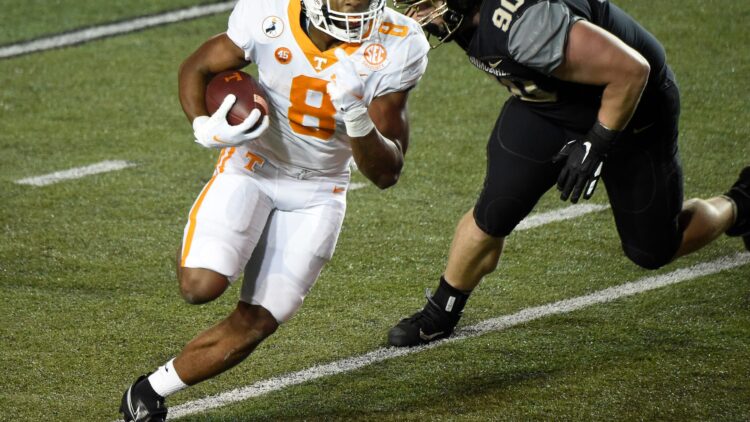 Tennessee running back Ty Chandler (8) races up the field for a touchdown during the third quarter at Vanderbilt Stadium Saturday, Dec. 12, 2020 in Nashville, Tenn. Gw43286

The North Carolina Tar Heels graduated not one, but two running backs to the NFL this year in Michael Carter and Javonte Williams. The duo did a little bit of everything during their time at UNC, leaving a massive void behind. The original plan was to rely on a trio of young backs, but then the transfer portal let a veteran fall into their laps: Ty Chandler.

Chandler exited a Tennessee program that found very little team success during his four years. The Volunteers went 19-27 throughout his career, earning only one bowl appearance (2019 Gator Bowl). They also went With his extra year of eligibility provided as part of the NCAA’s COVID-19 blanket waiver, Chandler decided to go to a program where he’d have a chance to win. UNC certainly gives him that chance with top QB prospect, Sam Howell, still on the roster.

Despite Tennessee’s lack of success, Chandler put together an historic career there. Over 46 games, he racked up 3219 all-purpose yards which ranks fifth all-time for the school. He showed a talent not only for running the ball, but he brings to UNC the abilities of a competent receiver and kick returner as well.

With the Tar Heels, Chandler has a chance for his numbers to explode. While putting up historic career numbers for Tennessee, Chandler never really had a breakout season for the Volunteers. In an offense where he’s had to share time with other talented backs such as Eric Gray, he averaged just over nine rush attempts per game from 2017-2020.

Due to this lack of touches, Chandler has yet to break 700 rushing yards in a season. Tennessee’s offensive scheme didn’t provide him with many opportunities, and the frustration within the program was evident as Gray, another potential NFL draft prospect, also transferred this offseason to Oklahoma.

With the opportunities he did get, Chandler flashed a ton of potential. He is a very explosive back that punches through holes with ferocity. At 5’11 and 205 pounds, he has decent size to maximize this skill, and you can bet UNC will be running him between the tackles a lot. The biggest question mark though is in his elusiveness. Too often it feels like he gets wrapped up early on in his runs, and with many of his carries coming in traffic, he needs to be able to make defenders miss.

The most exciting part of Chandler’s game now that he is alongside Sam Howell is his receiving. He was used in the screen game out of the backfield, but just as often, he had designed routes in the slot and even on the outside. In general, he is a pretty reliable pass catcher, but can be prone to occasional bobbles and drops. It will be very interesting to see how offensive coordinator, Phil Longo, approaches this aspect of Chandler’s game.

When talking about Chandler’s impact in the passing game, you have to mention pass blocking as well. Throughout his time at Tennessee, he was inconsistent, but early reports from UNC spring practices say that his blocking has improved dramatically. If this is true, that’s just even more value to Chandler’s game.

Finally, NFL teams should keep an eye on him for his kick returning experience. He returned 35 kicks for Tennessee, including bringing one all the way back for a touchdown in 2017. His aforementioned speed and explosiveness helps create big plays on special teams.

At this point in time, the clear top RBs in this draft are Breece Hall and Isaiah Spiller. Unless something drastic happens, that doesn’t seem like it will change. However after those two, this class is wide open. Chandler’s experience will be valuable for a young UNC team looking to compete in the ACC, and a more dynamic offensive game plan could unleash a player that we never saw at Tennessee.