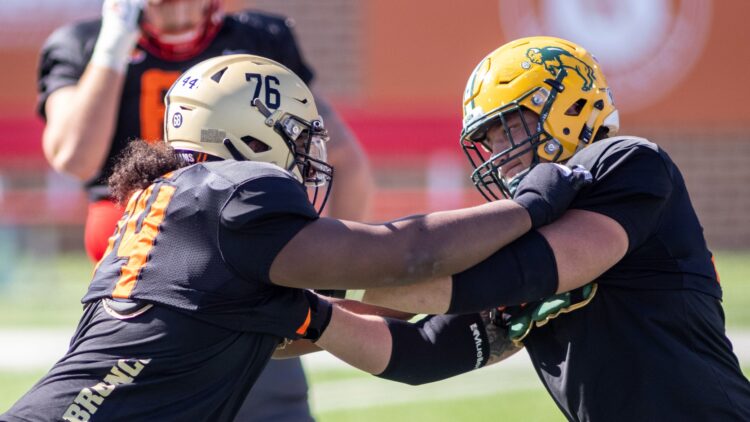 Trey Lance isn’t the only college football player from North Dakota earning headlines. Dillon Radunz was a dominant left tackle at NDSU and helped give Lance plenty of time to throw from a clean pocket. Of course, the same questions about the quality of opponent haunted Radunz like it did Lance, but that has at least somewhat changed.

Despite NDSU playing just one game in 2020, Radunz’s dominant 2019 season earned him an invite to the Senior Bowl. After getting off to a slow start on Day One, by the end of the week, he emerged as one of the best offensive linemen at the event, thus ending a lot of my questions in this regard.

Radunz’s talent starts with his length. He stands at 6’6 and has a wing span of just over 80 inches. This massive frame forces pass rushers to work extra hard to get by him, and oftentimes they don’t because his technique is excellent. He keeps his knees bent at all times in his blocks and creates great leverage for himself while sealing off defenders.

Radunz proved to be especially productive in run blocking, but his pass protection could use some work. His feet sometimes aren’t quick enough to keep him in front of the best pass rushers, and he is still on the lighter side at an even 300 pounds. However, I would expect him to fill out his 6’6 frame in the NFL, and his pass blocking can get better with improved footwork. His competitiveness and fierce play also gives him an edge. He is certainly a project at LT, but he can become a starter in this league.

That said, there may be some potential to move Radunz inside to a guard position. He dabbled at the position during the Senior Bowl, and he proved very effective. He could thrive in a zone blocking system, and he is certainly athletic enough to stay in front of DTs. This would also allow him to play to his strengths of blocking for the run.

Overall, while a project, Radunz has a role with the right team. He may be best suited in a depth role for his first NFL seasons, but he should be able to develop a few of his weaknesses in an NFL system. He could also just be an immediate starter at guard should a team give him that role.