D’Shawn Jamison Should be on Everybody’s Radar 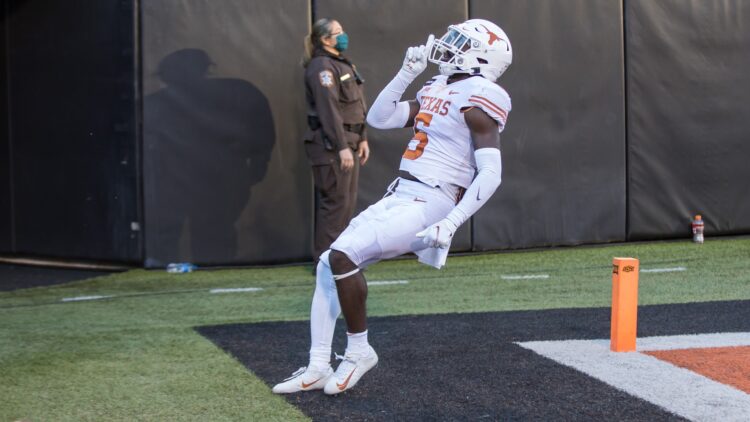 Oct 31, 2020; Stillwater, Oklahoma, USA; Texas Longhorns defensive back D’Shawn Jamison (5) motions to the crowd after running back a kickoff for a touchdown against Oklahoma State Cowboys during the third quarter at Boone Pickens Stadium. Mandatory Credit: Brett Rojo-USA TODAY Sports

It seems like year after year there is one player that nobody is watching for who comes out of the woodwork to wow everybody. One early candidate for that in 2022 is Texas Longhorns defensive back D’Shawn Jamison.

Jamison is entering his fourth year at Texas. In his first three seasons, his biggest impact has been as a kick and punt returner. He has returned 35 kickoffs for 1011 yards, with two touchdowns. On punts, he returned 30 for 253 yards, and one touchdown.

On the defensive side, Jamison has recorded 66 total tackles, three interceptions, and a forced fumble. Jamison is poised to make even more plays this season as Texas’ veteran leader in the secondary.

The way that Jamison can really put himself on the map is by ballhawking and proving his worth as a safety. He’s a bit undersized at 5’10” and 190 lbs, but his speed and ability to time some massive vertical leaps make him competitive against bigger players too.

It’s just more likely that he’ll have an easier time at the next level if he is allowed to rove around and play centerfield where his open field speed is a game changer. In 2017, Jamison ran a 4.59 40 yard-dash, the same as Cam Newton. Not that the comparison means much, I just want you to remember how fast Newton was.

His ability with the ball in his hands can’t be denied, and was on display in Texas’ spring game when he jumped a route and went 92-yards to the house to end the first half. Plays like this, and some of his other impressive work climbing the ladder against bigger players, suggest that he could be used in a pinch as nickel back.

Teams in the NFL are always looking for guys to play special teams, and Jamison’s competitiveness and experience returning both kicks and punts should guarantee him some early playing time there. Even if he doesn’t take the next step and rocket his way up draft boards, like I think he will, he should find a nice home in the mid-rounds and make some NFL GM extremely happy come the 2022 NFL Draft.