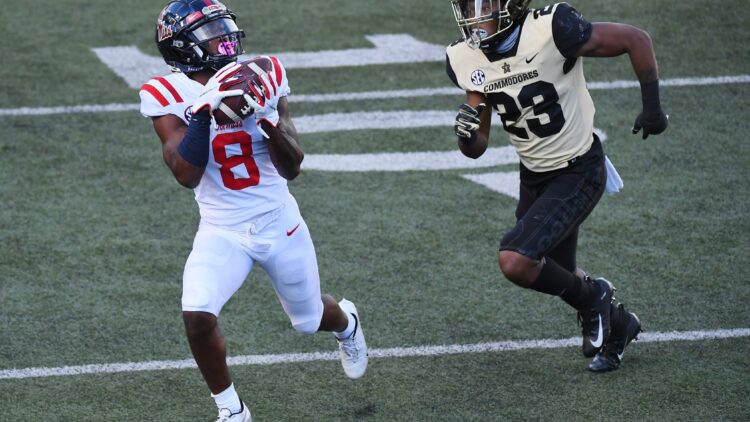 Elijah Moore is one of the more intriguing wide receiver prospects in this draft. Not a ton of people are talking about him as a high impact player, but the Ole Miss alum could be a steal in the middle rounds. He’s also a quarterback’s dream receiver. He’s not a very big guy, but Moore makes up for a lack of size with toughness. He plays physical football, and even when he takes a hit while attempting to make a catch, he rarely lets go of the football.

Even without the grit he shows on the field, Moore is the exact type of guy you want in the slot. He’s runs good routes, has ridiculous acceleration, and he’s slippery in the open field. The ability to make plays after the catch will carry over to an NFL offense, and it is the biggest reason a team should target him on Day Two if not late in Day One of the Draft. He’s also an extremely reliable receiver. Moore dropped just two passes in 2020 on 101 targets.

Not only is he effective in the slot, but he proved over his senior year that he can also make plays as an outside receiver. He took 53 snaps on the outside in 2020 compared to just eight combined over the previous two years. Even with this added role, he managed over 1100 yards and eight TDs in eight games.

Of course, his size is what will scare off some teams. He stands at just 5’9″ and 185-pounds; very small for any receiver, but especially for one that may dabble with outside reps. From the slot he proved nearly unstoppable, but we also have to remember that this was in a Lane Kiffin offense, one of the best offensive minds in college football. Case in point, Ole Miss averaged nearly 40 points a game in 2020. Of course, a lot of Moore’s success has correlated to the system he plays in.

All of that said, whoever picks Elijah Moore knows exactly what they are going to get out of him: a guy overflowing with both talent and heart. That guarantee will help him come off the board on Day Two.

Worst Traits: Size, Lack of Experience on the Outside