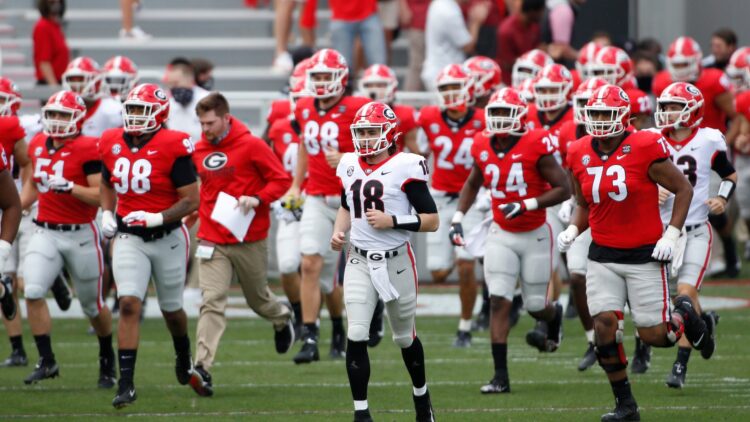 As a high schooler, JT Daniels was well known throughout Southern California as the latest quarterback stud to come through Mater Dei high school. In his three years there, he threw for over 15000 yards and 152 TDs before re-classifying and leaving high school a year early to play at USC. Talk about confidence. However, things haven’t worked out nearly as well as he’d hoped at the collegiate level. Daniels has a chance to turn that around this year, though. The question is, will he be able to turn himself into the top draft prospect everyone thought he would be?

During his sole year with the Trojans in 2018, Daniels had a few ups and downs. He showed flashes of the legendary high school QB, but he never truly put it all together. The game was a lot faster, and at times looked like he was lagging behind. He finished that year with a pedestrian 2672 yards with 14 TDs and 10 INTs while completing 59.5% of his passes in 11 games. USC went 5-7 and following the season, Daniels entered the transfer portal.

Daniels ended up with Georgia, but in the 2019 season opener things went from bad to worse when he tore his ACL. He wouldn’t return for the rest of the season, and his recovery dragged on well into 2020. He was only cleared in time to play the final four games of the 2020 season. In those four games, Georgia went 4-0 as Daniels averaged 310 yards per game at a 67% clip while tossing 10 TDs compared to only two INTs. Now, Daniels is fully healthy and ready to take on the SEC in 2021.

Daniels showed just in Georgia’s spring game that his skills are continuously evolving, but he still has the makeup of a traditional pocket passer. He is not much of a threat to take off and run with the ball, but that doesn’t mean he isn’t mobile. His footwork in the pocket is impeccable, and he maneuvers himself around pass rushers flawlessly.

While he is comfortable sliding through the pocket, the most notable knock on Daniel’s play has been an inability to make decisions on the run. He has lapses in judgment while making decisions on a rollout, and it leads to erratic throws or big hits. That said, he showed in the spring game that he has been working on this during the offseason. While in the past, he would have to stop, set, and throw, he made a couple very clean throws in motion just in this one performance.

Even with his collegiate struggles on the run, his pocket passing has been incredible his entire life. Outside of the 2018 season at USC, his accuracy is spot on in short-to-mid passes. His arm strength is off the charts too, and while he is occasionally off target, his deep passes have gotten better over time.

Daniels brings unreachable traits to the field as well. He does not shy away from pressure, and he has the composure and confidence to deliver accurate throws even while taking a hit. Even though he has a tendency to throw a low ball when being hit, a ball that gets spiked into the turf is far preferable to throwing a floater that can be picked off.

Even though Daniels has had an inconsistent collegiate career, especially because of his injury, the talent is clearly there. He brings a winning attitude and mentality to the locker room and a love for football. It would have been easy for him to be shaken after an underwhelming freshman season and derailing injury, but his desire to play and win has never wavered. In a recent interview this spring, Daniels had this to say about his desire to play and win a championship:

You won’t see Daniels’ name on a lot of mock drafts or big boards right now, but he has all the tools to have his stock soar as the season begins. If he can develop more in motion, and even become more of a dual threat, he has a chance to be one of the first QBs off the board. Keep an eye on him as the Bulldogs begin their season against Clemson on September 4th.