Is Kayvon Thibodeaux the Next Great Pass Rusher? 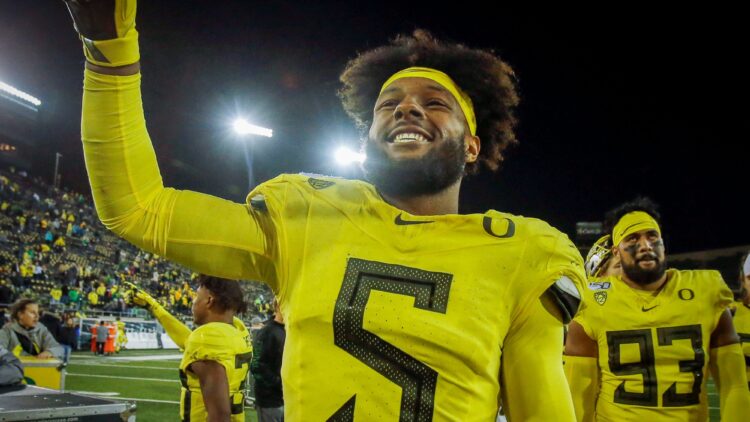 Oregon star defensive lineman Kayvon Thibodeaux celebrates after the Ducks’ victory over Colorado at Autzen Stadium on Oct. 11, 2019, in Eugene, Oregon. Eug 092520 Ducks Look To Get Back To Pac12 Football 1

As a freshman, Thibodeaux came into Oregon in 2019 as one of the top pass rushing recruits from California. When he went back home that summer, he was one of the best pass rushers in the entire country. His 14 TFLs and nine sacks over 13 games ranked second and fourth in the PAC-12, respectively.

Thibodeaux emerged from the pack due to his ridiculous burst as well as an endless motor. He wore opponents down with a continuous bulrush and feasted on what remained in the second half. The consensus was that if he could ever add weight and keep his speed, he would be one of the best pass rushing prospects we’ve ever seen.

While the pass rushing stats took a step back in 2020 (only three sacks in seven games), there were some promising developments for Thibodeaux. He seemed much more instinctual when defending the run, and he played all over the field: not only from both defensive end spots, but also stepping back as a linebacker in some pass coverage.

This versatility is what makes Thibodeaux special, but if he wants to be a great pass rusher in the NFL, he will need to put on weight. He obviously still has 10-11 months to do that before he even gets drafted. That said, 240-250 pounds will not cut it at the next level.

If he is going to rely on athleticism to get by, he needs to be playing at 100% every play. He spends a little more time coasting than you would like to see. Already, Thibodeaux gets taken out of plays by bigger o-lineman. When he can’t beat them to a spot, he gets caught by initial blocks and doesn’t quite have the bulrush to consistently get through it yet.

At this size, he looks more like a linebacker than a DE. While he has proven he can play there in small stretches, he has not done so consistently. That said, Thibodeaux has two paths to the NFL, which is more than a lot of prospects can say. He can either put on some weight and become a dominant pass rusher with great instincts in the run game, or he can be an uber-athletic linebacker with pass rush skills. We’ll see which path he takes as the 2021 season approaches.