Is This Year’s RB1 Breece Hall or Isaiah Spiller? 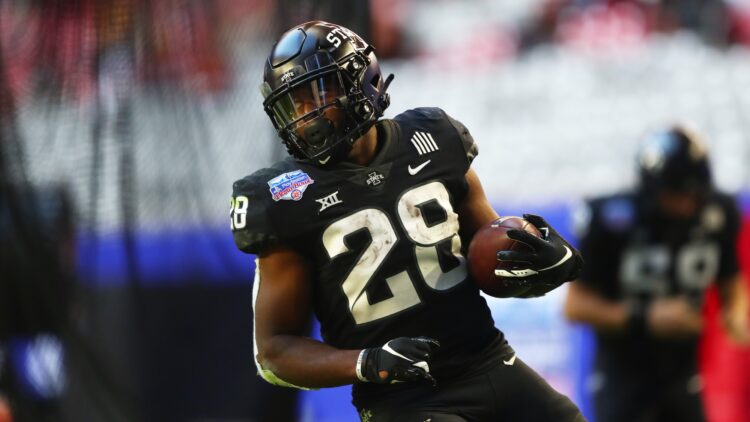 Breece Hall and Isaiah Spiller have had very similar routes to get to this point in their football careers. Both were late bloomers at the high school level; Hall specifically didn’t earn a starting spot on varsity until his junior year. Once they earned their spots though, they quickly burst onto the scene. Now entering their junior years, Hall and Spiller are set to be two of the first RBs taken in next spring’s draft.

As much as some people don’t like seeing running backs taken in the first round, it feels like a lock for both Hall and Simmons. Similarly to Najee Harris and Travis Etienne, the two backs feel like the cream of the crop. Some may toss Kyren Williams in that group for his impact as a receiver, but Hall and Simmons are both such dynamic rushers that I’m putting them in a separate class.

Hall had a very solid season in his freshman year with Iowa State. The numbers he posted in 2020 were ridiculous though. In the same number of games (12), Hall nearly doubled his rushing yards (897 to 1572) and more than doubled his touchdowns (10 to 23). Granted, this production was done in the high-flying Big 12 at an NCAA-leading 302-touch clip.

Hall’s ability to dodge tacklers both in the trenches and in open field is top tier. The cuts on his rushes look effortless but more often than not leave defenders in shambles. Then, he accelerates so quickly that tacklers have no chance to recover in time.

Hall isn’t without his flaws, however. The pass blocking chops haven’t always been there, and he often has lapses when given a blocking assignment. The other major concern I can see is one that won’t rear its head until the season starts. Hall may not be able to maintain the workload that he was put through in 2020. Another year of 300+ touches may deteriorate him going into the NFL.

Not only that, but Iowa State has a very capable quarterback in Brock Purdy who clearly took a step back last season. Purdy lost 110 pass attempts last year while playing just one fewer game. It’d make sense for the senior to get more chances while he tries to make a bid for the NFL.

Spiller is a magician in the backfield. He has the cutting ability of Hall, but he uses it a little differently. I’d compare Spiller to an ocean wave. Out of the gates, his runs don’t look flashy, but his impact is felt immensely by the end.

Spiller wades through defenders, making tackler after tackler miss, and out of nowhere he has a massive run. Look at these two runs on back-to-back plays. Both initially look like losses, but as the play goes on, Spiller just piles up moves. Then all of a sudden, he has 20+ yards on two plays that didn’t look like anything.

His physicality is a massive asset too. He seeks out contact on his runs, which wears down the defense as time goes on. Again, an impact that just builds on itself over time. Because of this love for physical play, his pass blocking needs less work than Hall’s. He uses his hands well and has a good stance.

Like Hall though, Spiller has his areas for improvement. He is definitely capable of being used as a receiver, but he is not especially effective in that area of his game. This is why some may toss Williams in the group to make it a big three.

It is also worth noting that Kellen Mond is no longer the QB at Texas A&M. This may be a blessing or a curse as it probably means Spiller has a larger role in the offense this year. If he can put up Hall-type numbers in the SEC, he is a lock for RB1. If he cracks under the pressure, maybe there is a case for Williams to enter the group.

If the draft were to be done right now, Hall is probably going to be taken before Spiller. His body of work at Iowa State has been impressive, and he proved more than capable of running all over Oregon’s defense in the Fiesta Bowl. However, Spiller has a schedule that includes Alabama, LSU, Auburn, and Ole Miss. If he can put up numbers on these teams, I would be much more confident that his production can translate to the NFL.