Jalen Wydermyer Could Be a First-Round Pick in 2022 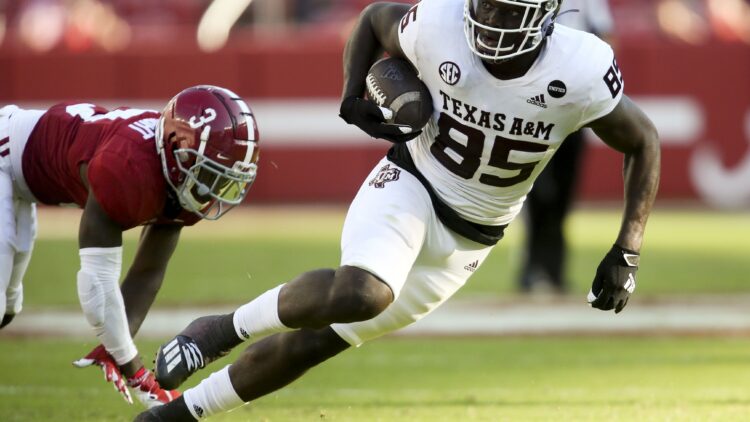 Versatile tight ends have become an endangered species in today’s NFL. Most of them are either great route runner or great blockers, but often times they are not both. For example, 2021’s fourth overall pick Kyle Pitts projects as an otherworldly receiver while bringing almost nothing to Atlanta’s blocking. However, they do still exist in small corners of the football world. It’s possible that one of them may become TE1 in 2021’s NFL Draft.

Jalen Wydermyer is not just a versatile tight end, but he was one of the most consistent players on Texas A&M’s roster in 2020. Wydermyer led Texas A&M in receptions and was second on the team in receiving yards. He also played 669 offensive snaps for the Aggies. For comparison, QB Kellen Mond played 682. When a player is on the field for virtually every snap, and the team goes 9-1 with an Orange Bowl victory, that’s pretty good value if you ask me.

So why should Wydermyer be valued so highly going into the 2021 CFB season? Well, this is where the versatility comes into play. He was the only tight end play both 300 receiving snaps and 300 run-blocking snaps in 2020, and he also earned PFF grades greater than 70 in each category.

At 6’5 and 260-pounds, Wydermyer is a massive target that runs right through smaller CBs. His route running isn’t the greatest yet, but he does have the ability to slip free in the middle of the field. As mentioned, he has extremely reliable hands and stays composed in traffic. For his size he is also surprisingly agile while making his catches.

He can go low:

Or he can go high:

This agility makes his already massive target radar even larger. That said, his ability to get out and block is where he will stand apart. He can stay in the trenches, but his instincts as a lead blocker downfield are incredible. These skills were showcased in the Orange Bowl with this block during Devon Achane’s 76-yard touchdown run.

In the last draft cycle, Pat Freiermuth was dubbed the nickname “baby Gronk”. Obviously, we have yet to see him perform in the NFL, but he showed a lot of the same versatility at Penn State that Wydermyer has shown. Wydermyer is arguably better both as a receiver and as a blocker though, and Freiermuth was a second-round pick. With a big season this year, Wydermyer could solidify himself as a first rounder in 2022.

Obviously the road will not be easy. Kellen Mond is now a Minnesota Viking, and the QB battle has already begun between Haynes King and Zach Calzada. The offensive line is also under major reconstruction as four starters left for the NFL. Wydermyer is going to have to be a presence of stability within this offense, and if he can do so while keeping the Aggies competitive, his draft stock will go through the roof.