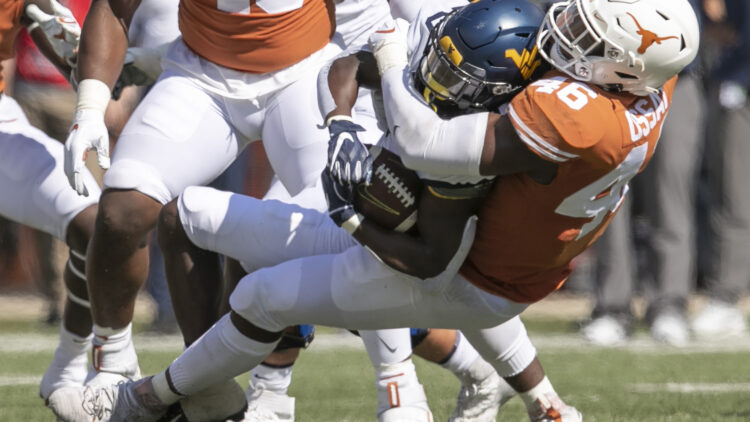 Joseph Ossai got a ton of experience while playing for Texas as he started 24 of the 36 games he played. That said, he is in a unique position where he still has plenty of room to improve. This is mainly due to the fact that Texas never really committed to playing him at one position until he played DE fulltime in 2020. He split his time between OLB and DE, but never really fine tuned his skills for either.

A player that is a “jack of all trades” but not really great at any one position probably isn’t someone that many teams would normally spend a first round pick on. However, the fact that there is no clear leader among the pass rushers of this draft means Ossai could still sneak in.

Ossai has the traits that could make him a great DE. He showcased his freakish athleticism at Texas’ Pro Day on March 11. He posted a broad jump of 10’11 and a vertical leap of 41.5(!!) inches. For reference, this is half an inch more than Cleveland Browns pass rusher, Myles Garrett 41-inch leap.

Of course, playing DE has very little to do with who can jump the highest in a controlled setting. Ossai isn’t just able to jump out of the gym, but his technique is pretty good considering how little time he’s spent at DE. He has the ability to build speed, and he has great hand power combined with long arms, allowing him to move offensive linemen.

Like I said, though, he is still a work in progress. He has great length, but his 245-pound body is still fairly small to get by NFL tackles. While his top speed is impressive, he does get off the line fairly slowly. This could be an issue with some of the more athletic OTs. Finally, he still has some troubles against the run and struggles to recognize schemes.

Overall, Ossai is by no means a finished product. He is skilled in some areas, but he can absolutely improve in others. Everyone that has been around him praises his work ethic and motor, so teams shouldn’t be afraid that he’ll be able to get better. He may never be the biggest DE on the field, but he has the talent and heart that can make up for it.