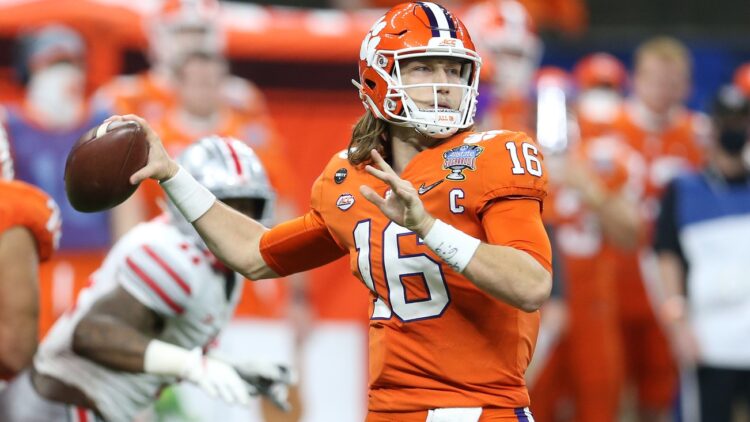 We’re officially 10 days away from the NFL Draft, so it’s time to get those last minute mocks out there. Over the coming week, I will be doing just that in a three-part series where I predict the first three rounds of the NFL Draft. Here is part one, including yet another trade in the top five.

People have spent the last couple years detailing Trevor Lawrence’s talent at the QB position. He brings a combination of throwing ability and athleticism to Jacksonville along with a championship pedigree. He’s a culture changer; someone the Jaguars need after a couple tough years.

The Jets traded Sam Darnold to Carolina, and they appear to be fully committed to taking a quarterback with the second overall pick. After a breakout year at BYU, and an equally impressive Pro Day, Zach Wilson looks like the choice for New York.

San Francisco made an aggressive trade up in the draft, moving three first round picks to pick in the third spot. While recent rumors about a Kyle Pitts/George Kittle duo are fun, all signs point to a quarterback.

Atlanta has been looking to move out of the fourth overall pick for at least a few weeks, and they’ll finally find their suitor on draft night. New England has traditionally avoided splashes on the first round, but if their free agency proves anything, this year is anything but traditional for the Patriots. As they watch Justin Fields fall from the top three, they will pull the trigger and move the necessary capital to snatch him before anyone else can.

No. 6, Miami Dolphins (traded from PHI)

Tua Tagovailoa needs consistent weapons to throw to in 2021 as he transitions to becoming the full-time starter in Miami. Kyle Pitts is considered by many to be the best non-quarterback in this draft, and he won’t have to travel too far from his alma mater of Florida to find his new NFL squad.

New head coach, Dan Campbell, made headlines in his first press conference for the Detroit Lions. While humorous, his energy and intensity is exactly what a young team needs after losing their franchise QB. Patrick Surtain is another talented player that will bring the “knee-biting” energy that Campbell is looking for in Detroit.

The Panthers just traded for a new quarterback and have Christian McCaffrey returning from injury. They should do their best to make sure both players stay on their feet as much as possible, and drafting Rashawn Slater will help boost an offensive line from the doldrums they suffered in 2020.

The Broncos are not satisfied with the QB play that they’ve gotten over the past few years, and while Trey Lance is largely unproven, he did nothing but win at North Dakota State. That will stand out to John Elway and Co., and Denver may just end up with a steal at the quarterback position in this draft.

The Cowboys secondary was flat out bad in 2020. It’s an area that they absolutely need to address, and with their tenth pick, they will have an option of either Jaycee Horn or Caleb Farley to bolster their cornerback position. In the end, they pick Jaycee Horn to avoid any remaining health concerns surrounding Farley.

The Giants’ offense suffered injuries to key players in 2020, including Saquon Barkley, and adding another weapon to Daniel Jones’ arsenal should help improve their ability to move the ball in 2021.

No. 12, Philadelphia Eagles (traded from MIA)

Well, a former Alabama quarterback will be reunited with an Alabama receiver, but instead of Tua Tagovailoa, it will be Jalen Hurts reuniting with Devonta Smith. The Eagles trade down, pick up an additional first rounder, and still get one of the best pass catchers in the draft.

The Chargers were lucky nothing happened to Justin Herbert last season. Herbert was pressured 187 times; most in the NFL. Christian Darrisaw is a very necessary upgrade to the offensive line.

After three of the top OTs are picked above them, Minnesota chooses to address another issue with their first round pick. It is well documented in the land of the Vikings how bad the defensive line was in 2020. The team began addressing the issue in free agency, and has now finished it in the draft.

No. 15, Atlanta Falcons (traded from NE)

The Falcons secondary was statistically the worst in the NFL in 2020. They manage to pick up one of the top CBs in the middle of the first round while also acquiring more draft assets for the future.

The Cardinals lost their All-Pro cornerback, Patrick Peterson, in free agency this offseason. In order to replace him, they snag a dynamic CB in Asante Samuel Jr., who could prove to be a ball hound in the NFL.

The Raiders need help all over their offensive line after losing three starters this offseason. Alijah Vera-Tucker is versatile enough that he can play all over the line, which will prove valuable for Las Vegas.

The Dolphins don’t have to go very far to find their new pass rusher opposite of Andrew Van Ginkel. Gregory Rousseau is a very raw pass rusher, but if his technique can be sharpened, he may just be the best EDGE in this draft.

The one area Washington could use help with defensively is their secondary. To fix this problem, Washington picks the top safety in this draft.

The Bears’ focus has historically been defense-first, and that trend continues. They lost a couple starters this offseason, and now put Phillips along a defensive line that also features Khalil Mack, Akiem Hicks, and Mario Edwards Jr.

The Colts get the steal of the first round and continue to focus on their offense after drafting Jonathan Taylor last year and trading for Carson Wentz earlier this offseason.

Tennessee’s defense took a couple steps back in 2020. While there are a few questions around Micah Parsons, he is undoubtedly a talented linebacker who can help revamp the Titans.

The Jets did not have a good rushing offense in 2020, and part of that goes on the offensive line performance. Their guards were not good last season, and Wyatt Davis should help create some running lanes.

Big Ben isn’t getting any younger, and Pittsburgh needs to establish a running game in 2021 in order to compete. While there is always going to be the debate over whether running backs should be drafted in the first round, this is absolutely a need for the Steelers.

No. 25, Jacksonville Jaguars (traded from LAR)

The Jags have put an emphasis on rebuilding a defense that largely led them to an AFCCG in 2018. Jeremiah Owusu-Koramoah is just another piece of that as an uber-athletic linebacker that can make an impact all over the field.

Cleveland is a contender with very little holes. Because of that, they add Christian Barmore to a fearsome defensive front that also added Jadeveon Clowney earlier this month.

Ojulari is yet another player in this draft that measures out as a physical freak. The Ravens have a void at the defensive end position after this free agency period, and Ojulari fills it.

The new-look Saints not only will have a new quarterback in 2021, but they also will have a largely new defense. They could use a CB2 alongside Marshon Lattimore, and Eric Stokes fills that role.

They finally did it; the Packers bring in a new, shiny wide receiver for Aaron Rodgers to throw to. Opposite of Davante Adams, Terrace Marshall Jr. should get plenty of touches in Green Bay’s offense.

Buffalo’s defense has been heralded as one of the best over the past few years, but 2020 was a different story. Picking Jayson Oweh will help flip the script back to the norm in 2021.

The Chiefs’ needs along the offensive line were exposed on the biggest stage during their Super Bowl loss. Samuel Cosmi will help provide some much needed depth in 2021.

What better place for the heir-appointed “baby Gronk” to end up? Tampa Bay has remarkably retained every starter from their Super Bowl run, and they will spend the 2021 draft looking to fill depth needs. They do not have consistently great blocking from the tight end position, and Freiermuth can be just that while also becoming a threat in the passing game.