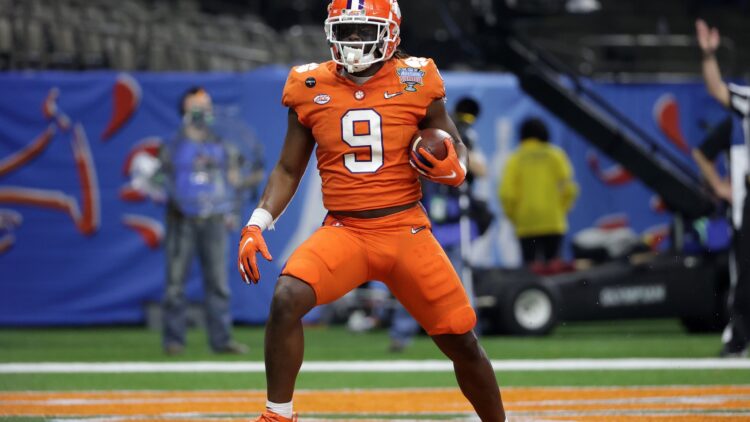 If you missed Monday’s round one mock, make sure to check out all the picks from that article here. Now, it is time to move on to the second round. Here is how I see all the draft picks going from Nos. 33-64. Note that Atlanta does not actually own pick No. 45 yet, but it is what I project as part of their return package for a first round trade with New England.

Teven Jenkins allowed all of four pressures in 2020 and adding protection for Trevor Lawrence is exactly what the Jaguars need to look for early in the second round. Jenkins is an immediate plug-in guy at either tackle or guard.

The Jets continue to strengthen their offensive line by taking left tackle Walker Little. His athleticism and technique make him a good pass protector; we just haven’t seen him on the field enough to say he’s a first rounder. The Jets won’t be contending for much in 2021, so their goal should be to keep Zach Wilson upright and healthy.

Three consecutive o-linemen off the board to start the second round, and Atlanta gets a great one in Landon Dickerson. Dickerson has incredible talent and showed his heart when he took snaps in the national championship despite tearing his ACL in the SEC title game. When healthy, he could be the best center in the draft. Health is the question, though.

No. 36, Miami Dolphins (traded from HOU)

Should Rashod Bateman fall this far, Miami would be getting a steal. 2020 was not a great year for Bateman, but 2018 and 2019 show a player that has first round talent. By taking Pitts at No. 6, and now Bateman, Miami has created a deadly passing offense for Tua to work with.

Zaven Collins is not a typical linebacker. He has the size of an edge rusher, and the speed of a cornerback. At the outside linebacker position, he will make an impact all over the field for the Eagles.

The Bengals defense needs some help in 2021, and Nick Bolton could prove to be an anchor for it. The Missouri prospect is an attacker and has an extremely high IQ at the linebacker position.

Kadarius Toney is one of the most dangerous wide receivers in the draft. His ability to make plays after the catch will prove very valuable to Carolina, and in a test season for new-QB Sam Darnold, giving him another option can only help him.

Melvin Gordon can be a workhorse when healthy, but Travis Etienne will add a passing element to Denver’s backfield that they lost with the departure of Phillip Lindsay. With Gordon set to enter free agency next offseason, Etienne is not a bad backup plan to have, either.

Dan Campbell strikes again. After getting Surtain II in the first round, the Lions shore up their offensive line by taking Dillon Radunz. Jared Goff should have plenty of time to throw.

Slot corners have now become regular starters in the NFL, and Elijah Molden fits that job description perfectly. With James Bradberry on the outside and Molden in the slot, the Giants secondary should improve.

The rich get richer. The 49ers have one of the best sets of receivers in the NFL and adding Elijah Moore in the slot only makes them better. Moore is a very reliable deep threat that will become a favorite of Mac Jones’.

When the Cowboys were making the playoffs a few years ago, they had one of the better offensive lines in the league. While it is by no means bad right now, the inside positions could use some improvement. Creed Humphrey will do that while opening up running lanes for Ezekiel Elliott.

No. 45, Jacksonville Jaguars (traded from MIN)

Brady Christensen was the left tackle of one of the greatest collegiate offensive lines ever. That along with his ridiculous Pro Day showing makes this a great pickup for the Jaguars.

A 320-pound nose tackle with a sub-five 40-yard dash is impressive enough by itself. Alim McNeil also brings a great balance between his pass-rushing and run defense, though, and Atlanta will appreciate what he brings on a weekly basis.

Greg Newsome isn’t the most athletic corner out there, but he has great IQ in coverage and rarely gets burned. This is a solid pick for the Chargers secondary that needs to improve across the board.

Jon Gruden loves flashy picks, and Ronnie Perkins is one of the flashier edge rushers in the draft. He is the only player on PFF’s list to have both his pass rush and run defense grades above 90. He is a one year wonder at Oklahoma, though, so his ability to consistently produce is a question.

The Boilermaker receiver is finally off the board at 49. He is a seamless slot fit alongside the trio of DeAndre Hopkins/A.J. Green/Christian Kirk. Arizona’s offense looks very fun in 2021 with this pick.

Miami has an impressive four picks inside the top-50, and they address needs with all of them. Jamin Davis may need more experience in coverage, but he has all the size and athleticism that you love to have at the linebacker position.

Back-to-back Wildcats off the board, and Washington continues to strengthen their secondary to match the ability of their front seven. Kelvin Joseph will fit very nicely alongside free agent signing William Jackson and Kendall Fuller.

The Bears passing offense needs to be much better if they realistically want to compete in 2021. Dyami Brown averaged over 18 yards per target, so he is a big playmaker that Chicago really needs next season.

Tennessee’s defensive line was bad in 2020; they ranked among the bottom-three in sacks. Basham Jr. did not have a great 2020, but if we were going just off his 2018 and 2019 tape, he’d be a surefire first rounder. His explosiveness and pass-rushing ability will be welcomed in Tennessee.

Indianapolis is another team that needs to revamp their defensive front, and Payton Turner is a great fit for that. He didn’t play much in 2020, but in the time that Turner got, he showed leaps of growth. Level of competition will be a question, but there is no doubt that Turner has talent in the pass rush.

The Steelers have not signed Alejandro Villaneueva, so it appears that they need help at tackle. Alex Leatherwood is not the most athletic guy at the position, but his size and technique certainly make him a viable option. He needs to improve his pass protection, which has gotten a little sloppy, so that is what will cause him to fall this far.

The Jamal Adams trade has not had great returns early on. That doesn’t mean it’s a failure, but it cannot help to bring in another defensive back to take some pressure off him. Jamar Johnson’s collegiate career as a Hoosier was filled with ridiculous playmaking ability, and that can help revive the Legion of Boom.

The Rams defensive line is already scary with Aaron Donald, but add in a high-ceiling EDGE, and that line could become unstoppable. Joseph Ossai is a little undersized, but he’s a workhorse, and if he can add a few pounds, he will fill out that 6’4 frame very nicely.

The Ravens probably would have liked to have gotten a wide receiver here, but five came off the board during the second round. Because of that, Baltimore solidifies their offensive line with Liam Eichenberg, who will most likely play guard, but has the versatility to play tackle.

Cleveland’s defense was sneaky good at times in 2020, but it was far too inconsistent. Richie Grant is projected as one of the best safeties in the draft and will provide tremendous depth for the Browns’ secondary.

The Saints continue to rebuild their defense in the second round, this time with a safety. The team franchise-tagged Marcus Williams and has an aging Malcolm Jenkins on the roster, so building depth at the position is not a bad idea.

Aaron Robinson has question marks, but not about his talent. His question marks revolve around where he will fit best in an NFL defense. He lined up in the slot a lot for UCF, but a ton of those snaps remarkably came in press coverage. That makes you think he may have a skill set as an outside CB as well.

The Packers enter 2021 with uncertainty regarding their offensive line. Corey Linsley is now a Charger, and David Bakhtiari is coming off an ACL tear. It may be smart to build some depth along the o-line before it gets out of hand.

The Chiefs defense has never been that great, but they’ve had an historically amazing offense to back them up. Rashad Weaver bounced back from a torn ACL in 2019 to have one of the better 2020 campaigns in all of college football, and he will bring all of that talent to Kansas City.

The Buccaneers are, to an extent, playing with house money in this draft. As mentioned in the first round, they are only looking for depth pieces. Ronald Jones and Leonard Fournette had inconsistent moments in 2020, so Javonte Williams is just another guy that can take reps in the running game. Better yet, Williams is only 20 years old, so he should only continue to get better. If he can improve upon the production he had at UNC, this is a great pick for the defending champs.