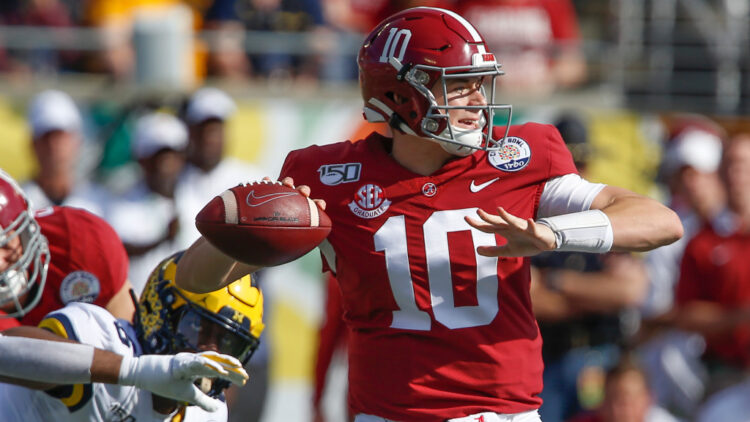 Trevor Lawrence has been anointed as the number overall pick for a couple years now and a surgery to his non-throwing shoulder doesn’t change that. Jacksonville has been searching for a franchise QB who brings more than stability for years now and Lawrence is their man.

Already the uncertainty starts, or it would have had the Jets not just moved Sam Darnold to the Carolina Panthers. That means New York is looking for their franchise guy now too as they have zero NFL snaps at QB on their roster.

All reports, including those by the reliable Adam Schefter, suggest that San Fran is going to take Jones at this spot. I don’t like it, but that’s apparently what the niners want.

In an unprecedented move, the Falcons take the fourth QB in-a-row to start this draft. Lance, although inexperienced, is an accurate thrower of the ball who should be able to develop and season while Matt Ryan plays his last couple years as a Falcon. This is assuming of course that Atlanta doesn’t choose to move back out of this spot.

Sewell may just be the best offensive lineman in this draft and the Bengals need to protect their investment in Joe Burrow. It would be nice to give him another weapon at this spot, but Burrow is the guy and they need to give him the best chance to succeed that they can, and you do that by protecting him.

The Dolphins have their offensive line figured out which means they can give their second year QB, Tua Tagovailoa, another weapon. This pick could go to any number of pass catchers, but Pitts has a chance to be the next big thing for tight ends and can be a matchup nightmare on both the line and split out wide. He should be the best pass catcher in this draft when all is said and done.

There’s talk that the Lions could move back from this spot, but they need to find a franchise quarterback after moving Matthew Stafford. If Fields is available at this point, they need to take him. He could be the second best QB in this class.

The Panthers solved their QB dilemma by bringing in Sam Darnold and now they have a chance to make their defense better. They already have a gamebreaker in Jeremy Chinn and adding Surtain would go a long way to bumping their defense from the bottom half of the league to the top.

The Broncos will likely struggle to decide whether to take one of the best offensive tackles in the draft or help their defense. Although it’s attractive for them to target a linebacker or even cornerback, they will cement a very solid offensive line with another solid tackle.

The Cowboys have bigger needs than wide receivers, but I don’t think that Chase can really slide any further. Jerry Jones will be absolutely salivating with the option of receivers to take, but the Cowboys target Chase instead of the slightly flashier Waddle/Smith.

The Giants have a lot of needs to fill, but especially on the edge of the defensive line. Paye is the most explosive defensive lineman in the draft and should help cover up both a weaker linebacking corps and defensive backfield.

Although the Eagles probably would have preferred Surtain at this spot, they still snag a Heisman winning receiver. Smith is the best route runner in this draft and will immediately give Philly an explosive and, more importantly, reliable option.

The Chargers need some help on the defense and they do it by snagging one of the best corners in this draft. Horn should make an immediate impact and help the Chargers take advantage of their newly found solid offense.

The Vikings revamped their defense last season letting several players walk and bringing in a ton of new blood. They’ve once again focused on the defense this offseason bringing in multiple new defensive backs and a defensive tackle. However, they still lack pass rushers, especially with some uncertainty with Daneille Hunter and his contract. Phillips gives them a boost in rushing the passer.

A lot of fans will want to see the Patriots move up to fix their QB situation. However, Parsons presents a key piece in the future of the Patriots defense, something that Bill Belichick no doubt understands and wants.

Waddle may end up as the best receiver in this draft, but he could be the one of the top three that sees the biggest slide. Waddle gives Arizona an extremely explosive option for Kyler Murray and a great complement to DeAndre Hopkins.

The Raiders have received some criticism for their loyalty to QB Derek Carr, but that doesn’t change with this round unless they make an aggressive move up the board. Owusu-Koramoah brings athleticism and the potential to be great.

The Dolphins already spent a first round pick on their new offensive weapon and this time add a very explosive, if raw, threat to their defense. If Pitts is as versatile as he is expected to be, they should be able to do this with very little issue.

The WFT needs a quarterback, but one doesn’t fit the slot here. Darrisaw is an excellent offensive line prospect who should immediately shore up that position group.

The Bears defense could use some help with the loss of Kyle Fuller, but the defense has never been the problem under Matt Nagy. A shift to an offensive perspective could benefit them greatly and Bateman could be the steal of the draft here. Although he had a weak 2020 season on a bad Gophers team, he can compete with other WRs in this first round.

The Colts could target either of the two prospects that were taken before them, but they would still be happy with Newsome falling into their lap at 21.

Samuel is the best cover man in this NFL Draft and getting him this late in the first will be an absolute gift for the Titans.

After securing their assumed franchise QB, the Jets can take this any direction they want. Vera-Tucker has the versatility to play both the inside and outside of the offensive line. If they’re serious about creating a great offense, they need to protect Wilson and give him a chance to succeed.

The Steelers are another team that could target multiple positions. They find a steal here in Farley who missed Virginia Tech’s pro day after a surgery on his back.

Marshall gets lost in the shuffle of high-end receivers, but has put the ball in the endzone 23 times in just 19 games over the last two seasons. He gets to show what he can do catching passes from the best quarterback in this draft.

The Browns finally snapped their playoff drought last season, but need to step up their defensive game to compete against the AFC’s best. Ojulari gives them a high motor player who should only get better by developing his technique further.

The third and final AFC East team to pick in the mid-20’s, the Ravens need help on defense. They could seek help on the defensive line, but having missed out on the top end edge rushers, and no defensive tackles to fit the slot, the Ravens can snag the draft’s first safety (assuming Samuel Jr plays CB) in the explosive Moehrig.

The Saints are on the cusp of a rebuild after losing a significant portion of their defense and their best QB ever. If they want to stay competitive in the interim, and make an aggressive move up the board for a top QB, they’ll need to focus on their defense and a big part of that is recapturing their pass ruhs.

The Packers need to get some new blood in their offensive line and Jenkins fits that need. Green Bay certainly knows the importance of a good, experienced offensive line and they can start to build that for the next era of football.

The Bills are ready to compete for their first Super Bowl appearance since 1993. However, they’ll need to hold the Chiefs, and other AFC contenders, in check better. Davis is a freak athlete who showed out at his pro day and should be a first round pick.

Radunz could be a bit of a reach at this point, but the Chiefs need to figure out their offensive line.

The Bucs don’t need a wide receiver here, but handing Tom Brady another weapon could be a great idea. Toney is an excellent RAC guy who should fit in very well into Tampa Bay’s offense.