Mohamed Ibrahim is Poised for a Breakout Season 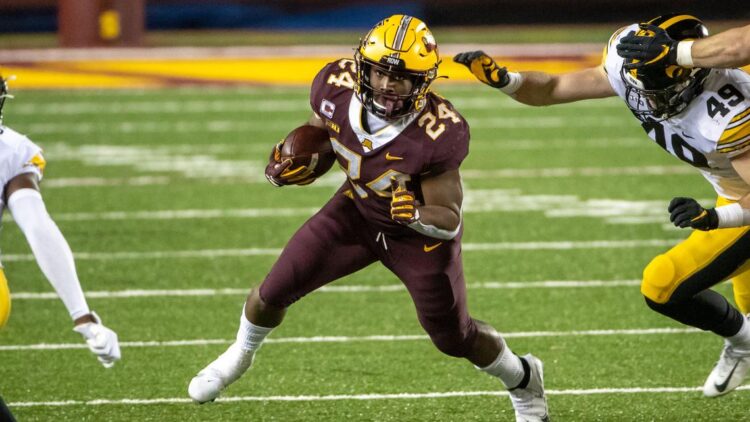 Minnesota Golden Gophers running back Mohamed Ibrahim (24) rushes with the ball in the second half against the Iowa Hawkeyes Friday, Nov. 13, at TCF Bank Stadium in Minneapolis. Jesse Johnson / USA TODAY Sports

The Minnesota Golden Gophers star running back is on the verge of greatness. In the 2020 season, Ibrahim rushed for 1,076 yards and 15 touchdowns. Those numbers are already impressive, but Ibrahim accomplished those stats in just seven games. That means his pace was absolutely insane.

If Minnesota had played a full season last year, and Ibrahim maintained the same stats, he would have totaled 1,845 rushing yards and 25 house calls. Both of those would smash the University’s current records. Those numbers actually compare very similarly Shonn Greene’s numbers in 2008 for the University of Iowa.

Greene had about 25 pounds on Ibrahim. However, I think the comparison sticks when you consider the difference in the eras the two play/played in. Green was a patient, reliable back who could bruise defenders or run right past them if he had the lane. Ibrahim does the same thing, but he’s a sleeker, slimmer version for the space game that football has become.

There is one really important question that needs to be answered before we can predict if Ibrahim will or will not write his name in the record books. Will his use in the offense go up or down this season?

In Minnesota’s seven games last season, Ibrahim was one carry under his career high of 202. His 202 came in his freshman season (2018) in ten games, meaning he had 20.2 carries per game. 201 carries in seven games works out to 28.7 carries per game. If he were to maintain that pace for 12 games, which is what my prior projections are based on, he would amass 344 carries.

This isn’t an insane amount of carries, but it is abnormal. Since 1956, the 345-plus carries-in-a-season mark has only been his 50 times. Interestingly, the numbers do line up quite nicely with some names familiar to the NFC North. Detroit Lions great Barry Sanders rushed 344 times in his magical 1988 season at Oklahoma state. The Vikings own Adrian Peterson rushed 340 times in his Freshman campaign at Oklahoma en route to finishing second in the Heisman vote.

I’ve thrown out a couple big names here, but I want to name just one more smaller one. Toby Gerhart. He rushed for 1,871 yards and 28 touchdowns on 343 carries for Stanford in 2009. Gerhart, like his teammate Peterson, finished second in the Heisman voting that season. Keep that name and stat line in mind.

The one thing that all of those guys have in common was that they were essentially their team’s entire offense. Ibrahim could be, but it isn’t really PJ Fleck’s style. The Gophers run a read-pass option on most plays from scrimmage, or at least fake it.

This means that Ibrahim gets the benefit of being given the best chance to succeed on any given play. However, it also means that he shouldn’t be getting the ball 27 times a game. The balance would need to be pretty far off for him to record those numbers.

Which is exactly what happened in Minnesota last year. After the Gopher’s historic 2019 season, they seemed on the cusp of building a football dynasty. Of course, that’s only if you looked at it on paper. In reality, Minnesota’s defense regressed hard last season. Quarterback Tanner Morgan, who had a few rumblings of Heisman votes after leading that explosive offense, seemed to become a high schooler all over again.

Basically, Minnesota needed to control the ball last season to have any chances of winning. This made Ibrahim more valuable and knocked the balance of the offense all out of whack. Fleck wants his offense to be able to take chances, but if your defense is awful and your quarterback can’t be trusted, you need to lean on your running back.

The hope is actually for Minnesota to return to those 2019 numbers where Ibrahim had 114 carries and only 604 yards. I don’t think this hurts Ibrahim at all though. He has already shown to NFL teams that he can carry the rock close to 30 times a game. Now, he should be concerned about staying healthy and moving his draft stock up with some more, opportune, running.