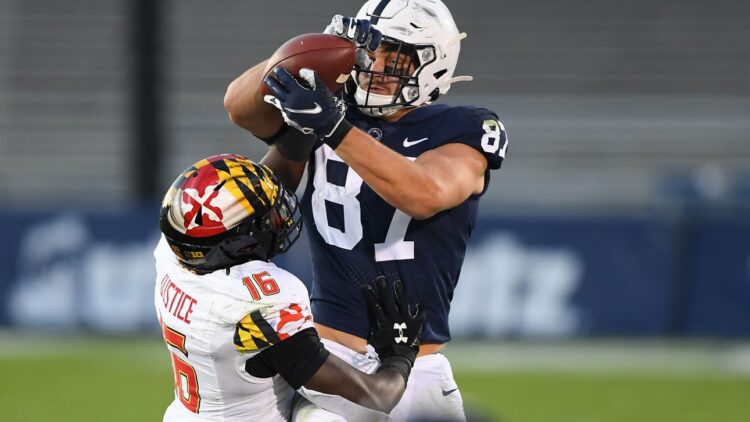 The tight end position has some serious talent at the top this year. The potentially generational Kyle Pitts is expected to be a top-10 pick, but he is not the only one worth being excited about. Another tight end very well could hear his name called on night one of the draft, and while he is the second definitely the second-best at his position, Pat Freiermuth has been donned with the nickname of “baby Gronk”.

While Freiermuth probably isn’t going to be the next Rob Gronkowski, he is still a very talented player. He fits much better into the traditional tight end position than Pitts does as well. The combination of Freiermuth’s 6’5, 260-pound frame and his propensity for physical play makes him a good blocker along the line of scrimmage. This is the part of Pitts’ game that hasn’t developed yet and is part of what has made Gronk so great. Freiermuth will be much more capable of impacting the game in multiple ways. If you’re interested in seeing more of Freiermuth’s skills as a blocker, watch his game against Ohio State in 2019 where he was forced to match up with Chase Young. Young beat him occasionally, but Freiermuth never backed down and battled the entire game. If that can be said about his game against one of the better edge rushers in the NFL, he should certainly make an impact for whoever drafts him.

Even though Freiermuth isn’t as good a receiver as Pitts doesn’t mean he isn’t capable of being a target, either. His size makes him a mismatch with anyone that tries to cover him. Though he played just four games in 2020, Freiermuth showed in 2018 and 2019 that he can be a presence down in the red zone. The former Nittany Lion caught 15 TDs over those two seasons for Penn State.

Michigan State found that out the hard way in 2019 when they allowed Freiermuth to catch three scores en route to a 28-7 victory over the Spartans. He showcased all of his versatility in the receiving game during this win. The first touchdown was a lob that was out of reach of a smaller corner, the second was a slant where Freiermuth outran the Spartan defense to the endzone, and the final one was a catch around the five where he just bullied his way through three defenders across the goal line.

Of course, there are things about the “baby Gronk” that will concern some teams. His 2020 season was cut to four games because of a shoulder injury that he tried to play through. However, the shoulder proved to be too much and surgery ended the season for Freiermuth. The thing that derailed Gronkowski’s career before his comeback in Tampa Bay was injuries. These injuries included issues with his shoulder. You never wish something like that on someone, but Freiermuth now has the injury history that will cause some teams to move past him.

Secondly, in a strictly Pitts vs Freiermuth comparison, Pitts runs circles around him, literally. Freiermuth is just not that quick, which will limit his open field contributions. His speed won’t allow him to break away from too many defenders, and he doesn’t have the capabilities to break tackles.

Typically, tight ends aren’t selected in the first round at all, but there absolutely is potential for two of them to go on night one this year. A team like Buffalo could use another reliable red zone target and blocker. The Bills did not get a ton of contribution from the position last year, and Freiermuth would instantly be a third target for Josh Allen to throw to. That said, if he is still on the board going into night two, he could be waiting until late in the evening to be selected.