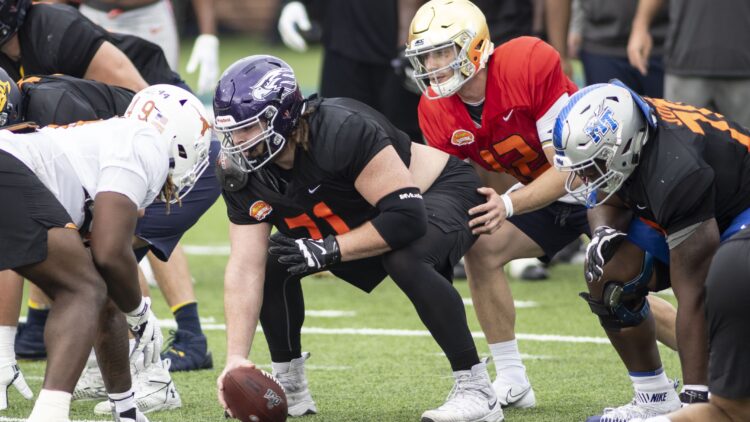 Quinn Meinerz has largely been under the radar for most of his football career. Growing up in the backwoods of Wisconsin, he played the unglamorous guard position and received very little attention coming out of high school.

The offensive lineman played his collegiate career at a small Division-III school, the University of Wisconsin-Whitewater. Even after his collegiate career came to an end, not too many people were paying attention to him yet. Then, the Senior Bowl happened. With that showing, you’d think he played at one of the more premier programs in the country.

Meinerz is exactly what NFL teams want out of iOL players. His 6’3”, 320-pound frame fits perfectly at a guard spot. He excels at left guard, but he is certainly capable of playing either side and even some center. I’ve said it before, and I’ll say it again, versatility is key in the trenches.

The Hartford, Wisconsin, native has not been the fastest moving guy throughout his collegiate career. That said, 29 teams showed up to his Pro Day in March, and he put on a show. Meinerz ran a 4.86 40-yard dash, and he put together a 7.33 three-cone drill.

Even if some teams still have doubts about his athleticism, Meinerz’s technique helps him compete with the best opposing defenders. He was making five-star defensive linemen look silly during his Senior Bowl week.

One key component to this blocking ability is his background. Meinerz was a wrestler throughout high school, and it shows on the football field. He creates terrific leverage and knows how to use his hands to his advantage. The clips also show off his versatility across the offensive line.

Another advantage Meinerz has over other guys going into the draft, especially those from small schools, is that he was born to play guard. He has always played within himself and to his strengths. He won’t have to make a position switch like so many others who played tackle throughout college and now have to transition to guard.

Not only that, but his toughness will be an asset as he advances to the NFL. Here are some clips of offseason workouts putting his strength and toughness on display.

How can you not root for a guy who spends his summer in the woods lifting logs?

Concerns will surround Meinerz about his level of competition in college. That said, some of those fears should be quelled after dominating Power Five competition back in January, and his obvious dedication to improvement showed at his Pro Day. His versatility is something that should be attractive to many NFL franchises while his skill and mindset has caused his draft stock to soar over the past couple months. He should be a middle round pick once the draft gets under way.