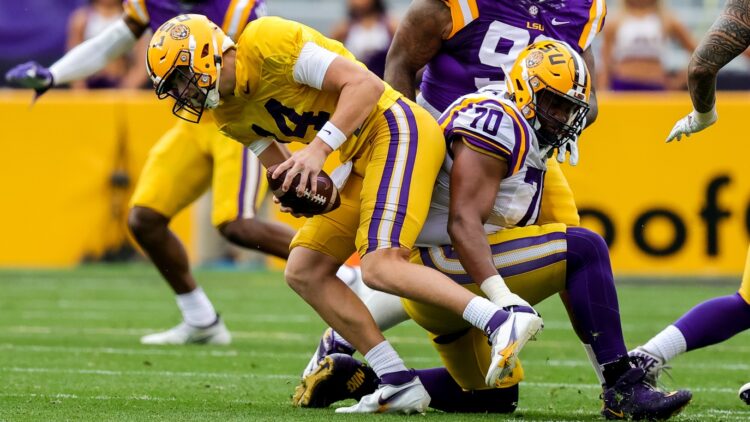 Minnesota Vikings fans really should be rooting for the LSU Tigers. Not only did LSU give them rising star Justin Jefferson, but also stud defensive end Danielle Hunter and the new veteran defensive back Patrick Peterson.

Outside of the current members of the Vikings however, the LSU Tigers are currently rostering the son of former quarterback Brad Johnson. The Tigers also were the college team of Thaddeus Moss, son of the greatest Minnesota Vikings receiver of all-time, Randy Moss. Johnson, who enjoyed two different stints in Minnesota, may be nationally remembered for helping bring the Tampa Bay Buccaneers their first ever Super Bowl title in 2002.

However, Vikings fans probably remember him best for one of the single greatest effort plays in NFL history. Johnson is one of only two players to throw a touchdown to himself. Unlike Marcus Mariota, who is the other player to catch his own touchdown, Johnson’s came on a spectacular run after the catch.

It’s no shock then to find out that Johnson is a pretty great athlete, being a two sport athlete while at Florida State, and it seems he has passed some of that athletic ability onto his son, Max Johnson.

Max, who is entering his sophomore season at LSU, has shown an affinity for finding gaps and rushing the ball in his short time for the Tigers. In six games last season, he rushed for 119 yards and two touchdowns. He also put up 1069 passing yards and eight touchdowns to just one interception.

Despite decent numbers, Max only collected a record of 2-3 and is currently in an open competition for the Tigers’ starting job. His competition is fierce with Myles Brennan, and Garrett Nussmeier. To start the spring, Johnson was taking first team snaps as he won the Tigers’ last two games of the season and seemed to breakout against Ole Miss.

However, head coach Ed Orgeron has publicly stated that the job is in fact in the air and “let the best man win.” Johnson certainly has his work cut out for him. Fifth-year senior Brennan looked like he was rising last season, putting up 370.6 yards and 3.6 touchdowns per game. Brennan’s luck turned sour however when he suffered a torn oblique in the Tigers’ 45-41 loss to Missouri.

TJ Finley was Brennan’s first replacement off the bench and played well enough to beat South Carolina and Arkansas. However, he found his way to the bench after poor performances against Auburn, Texas A&M, and Alabama. Finley played this spring at LSU, but has since transferred to Auburn.

Finally, Johnson will have to beat out 2021 signee Garrett Nussmeier. Nussmeier may seem like the de facto third stringer, being a fresh face out of high school, but he was an early enrollee at LSU and competed right alongside Brennan and Johnson.

Obviously he has zero experience in the college game but he was a four star prospect out of high school and the 13th best quarterback in the 2021 class according to ESPN. As a senior at Marcus High School in Flower Mound, Texas he put up 2,815 passing yards and 33 touchdowns to only five interceptions. He also has NFL blood being the son of former New Orleans Saints quarterback, and current quarterbacks coach of the Dallas Cowboys, Doug Nussmeie