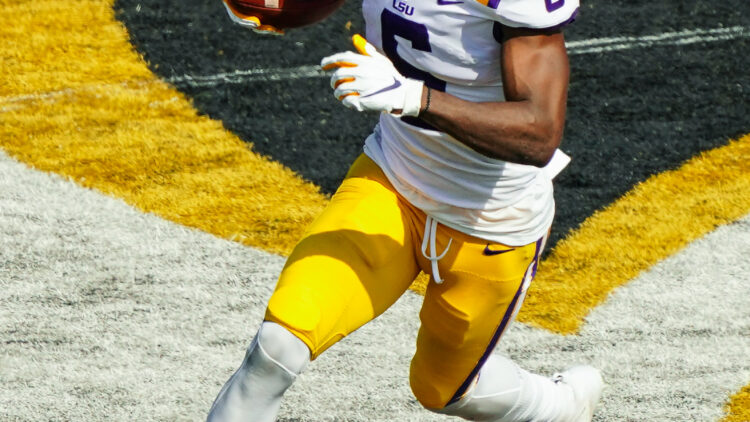 Terrace Marshall Jr. spent the first two years of his LSU career in the background behind players like Joe Burrow, Clyde Edwards-Helaire, Ja’Marr Chase, and Justin Jefferson. That was not the case in 2020. With Chase opting out for Covid concerns and the other three entering the NFL Draft, the offense ran through Marshall in 2020. He proved he was up to the task as he averaged over 100 yards receiving and a touchdown per game.

Marshall has always shown flashes of WR1 ability, but he hadn’t ever been really to showcase it. All questions about his talent should be answered now, though. He runs very crisp routes, with seemingly effortless change of direction. His 6’3, 205-pound frame makes him an ideal fit for the outside, but he has also proven that he can make plays in the slot. The 4.38u speed that he showed during his Pro Day makes that possible.

In studying his film, his awareness along the sideline seems elite as well. His ability to make plays and get his feet down in bounds should give his future QB confidence. Finally, his size will make him lethal in the red zone. Even when he was playing alongside Chase and Jefferson, he managed to find the end zone 13 times. In fact, his 15 red zone TDs since 2019 is the third-most among D-1 players.

The biggest issue with Marshall is one commonly seen with young receivers. He occasionally has frustrating lapses in concentration that lead to drops. A lot of this comes with looking upfield or anticipating hits before the pass is secured. It should be something that improves with experience, but could cause a few issues in the short term. After all, he only has one true year of starting under his belt. Once the pass is secure, he isn’t the most elusive player after the catch, either. He lacks a second gear and doesn’t have much of a juke in his arsenal.

Overall, Marshall is a player that should show quick progression. Should he get a chance to start, he can polish up some of his flaws and advance his strengths to a higher level. Marshall would make a lot of teams better in the passing game and will be high on many teams’ draft boards.

Draft Projection: Mid First Round to Early Second Round