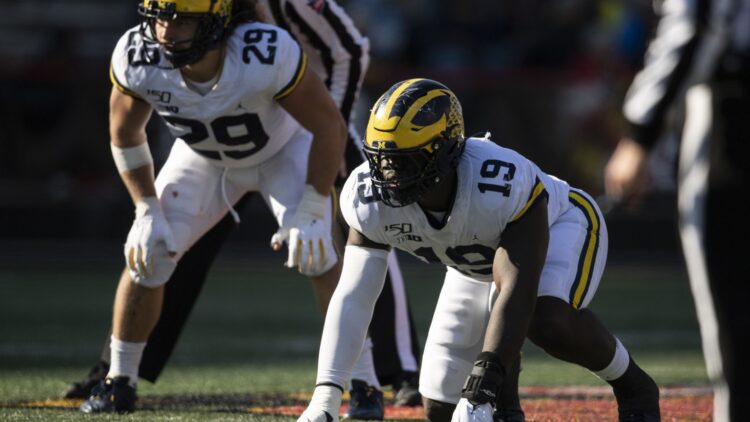 Kwity Paye was one of the Big Ten’s most disruptive edge rushers while he played for Michigan. He wasn’t the most athletic player in the class, but he has multiple moves that can get him in the backfield, and his technique is surgical. Because of his dominance as a pass rusher, he earned the 21st overall selection in this spring’s NFL Draft.

There wasn’t a much better place that Paye could have landed other than Indianapolis. The Colts boasted one of the top defensive units in the league during 2020, and they should carry a stout group into 2021 as well. Playing alongside established players like DeForest Buckner should make Paye’s transition to the NFL much smoother.

Rousseau opted out of his 2020 season at Miami, but his 2019 season was impressive enough to earn a first-round selection anyway. To be clear, that 2019 was some of the most dominant football college football has seen. In 13 games, he totaled 15.5 sacks along with 19.5 TFLs and two forced fumbles. His size and athleticism are made for the NFL as he stands at a massive 6’7 but moves like he’s 6’3.

Of course, the question about Rousseau is whether one full season of collegiate football is enough experience to go into the NFL and help a team. Normally it may not be, but in Rousseau’s case, he has proven to be a worker. He will make the best of the situation given to him and learn from the veterans in the Bills organization.

It may seem odd that people are putting such stock into a player that didn’t record a single sack during the 2020 season. However, he did show an improved ability to get off the edge in 2020 with much smoother technique. Then he recorded one of the most ridiculous Pro Day stat lines ever, including a 39.5-inch vertical and 4.36 40 time. This is absurd athletic ability for someone that also clocked in at 257 pounds.

Playing opposite of Calais Campbell should be massive for Oweh. Teams will be double teaming Campbell, and there will be plenty of chances for Oweh to be the one finishing plays against slower offensive linemen. The Ravens may have found a gem if he can continue developing aspects outside of pure athleticism.

Jaelan Phillips has an intriguing amount of skill in his game. However, his injury history is equally as concerning. The 18th overall pick began his collegiate football career at UCLA before having to retire from football due to concussion concerns. He sat out the 2019 season before joining Miami and putting together a very solid 2020 for the Hurricanes.

Phillips begins his NFL career with a Miami Dolphins squad that is looking to play meaningful football this winter. Outside of Emmanuel Ogbah, the defensive front doesn’t have a ton of veteran presence. Phillips will get a large role early on in Brian Flores’ defense.

Joseph Ossai is a bit undersized, weighing under 250 pounds. However, he proved effective on the edge as a two-year starter for the Texas Longhorns. He can turn into something very special in Cincinnati as the Bengals attempt to turn their franchise around.

In fact, Ossai thrived not only as a pass-rusher but in run defense as well. He recorded PFF grades above 80 in both areas. Cincinnati went out and got Trey Hendrickson in free agency, and they are a young team that should play with a chip on their shoulders this season. This is the perfect environment for Ossai to thrive as he begins his professional career.