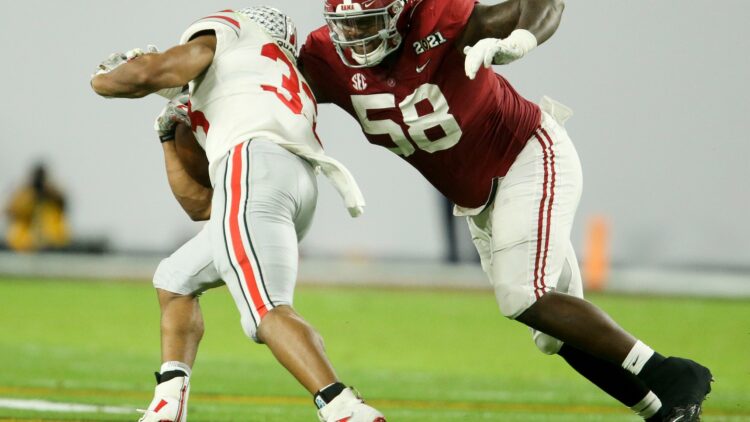 Christian Barmore is easily the most NFL-ready IDL in this draft class. He can a wrecking ball against the run, and his ability to pressure the QB showed throughout this past season’s College Football Playoff. The New England Patriots selected Barmore in the second round of this spring’s draft, and he should be able to help a defense that gave up the seventh-most rushing yards in 2020.

Barmore is not without his question marks, though. Consistency is at the top of that list. While he has shown flashes of greatness throughout his career, the former Alabama star had some low floors too. Last year particularly, he did not show up against conference rivals Tennessee and Florida. He will need to eliminate these types of games in order to find long-term success in the NFL.

New head coach Dan Campbell has hoped to revitalize a physical brand in Detroit. In that spirit, the Lions picked 320-pound defensive tackle Alim McNeil in the third round. McNeil was not highly touted for his athleticism at NC State, instead his pure mass and strength that just moves opposing offensive lines.

That said, McNeil has impressed Detroit’s coaching staff to no end. His footwork in the trenches has inspired Campbell to give him the nickname “twinkle toes”. Additionally, defensive line coach Matt Walsh said that McNeil has shown much more athleticism than he expected. If he continues on this track, the Lions defense could be great sooner than later.

The Lions struck twice with intriguing defensive tackle prospects this year. Unfortunately, they haven’t gotten much of a chance to see what Levi Onwuzurike can truly do yet. The former Washington Husky hasn’t played since 2019 as he opted out of the 2020 season. Now to start training camp, he’s struggled to find a role. He’s been on the injury list but has been listed as undisclosed.

When healthy, Onwuzurike has shown aa propensity for the pass rush up the middle. His length and explosiveness off the line make it hard for slower guards to keep him off the QB. It’s still early, and Onwuzurike should be expected to play a role in Detroit’s defense, especially considering he was an early second-round pick.

Milton Williams has proven to be a ridiculously athletic interior defensive lineman. His pro day was filled with eye popping numbers, and he dominated Conference USA on the field. In 10 games for Louisiana Tech last year, he totaled 10 TFLs and 4.5 sacks.

While he’s on the the interior defensive line list here, Williams may not even be a true IDL in the NFL. The Eagles have been playing him all over the line thus far into training camp, and they may ask him to do the same in games. His speed dusts guards, and he is strong enough to tussle with the tackles.

The IDL is most likely going to be the weakest area of this draft, and this is where production may drop off. That said, Tommy Togiai has the best chance to see success on the field. The Cleveland Browns signed Jadeveon Clowney to play opposite of Myles Garrett. With all this attention to the outside of Cleveland’s defensive line, it leaves opportunity from the inside.

Togiai is just a one-year starter that didn’t get a ton of reps given that Ohio State played just seven games in 2020. He doesn’t look like a great pass-rusher right now, but his potential as a run-stuffer is great. He may only earn rotational snaps during his rookie year, but there are certainly reps to be had.