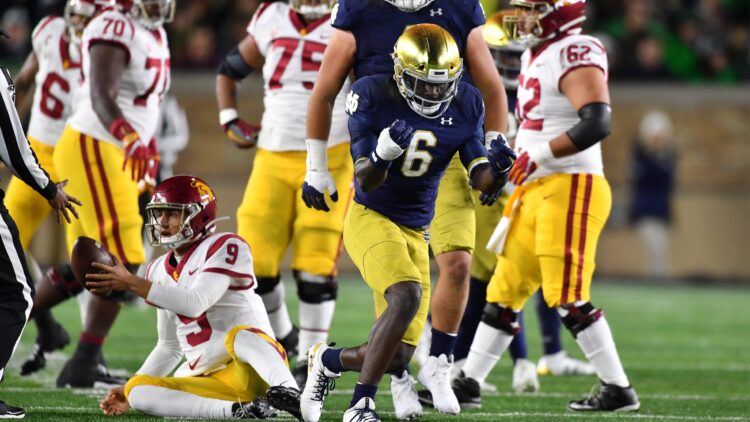 Micah Parsons sat out the 2020 season at Penn State, but in his first two years at Penn State he proved all he needed to going into the 2021 draft. His prowess in the run game is unrivaled at the linebacker position, and his versatility in blitz packages should keep him on the field constantly.

Thus far into training camp, the 12th overall pick has done nothing but impress for the Dallas Cowboys. This is a defensive unit that desperately needs a boost if they want a legitimate shot at competing in 2021. Parsons won’t be the entire solution, but he is certainly a step in the right direction.

It may take a little longer than expected, but an already good Cleveland Browns defense should become even better after stealing Jeremiah Owusu-Koramoah in the second round of the draft. JOK missed the first 10 days of training camp after a positive COVID test, but he is working on getting back up to speed in the defense.

The 2020 Butkus Award winner plays a rare brand of football. He’s position-less. He has the size and chops to work as a linebacker, but he can also stick to wide receivers in coverage. This is a valuable trait for any team, but especially the Browns while they continue their pursuit of a Super Bowl.

Everything about Nick Bolton is fast. His instincts, his ability to stop runs, his blitzes; even the name, Bolton, just exudes speed. Similarly, he has quickly made his mark on the Kansas City Chiefs.

The Missouri Tigers standout tallied 220 tackles over the course of three years, and he should continue to rack up numbers for a young KC defense. Thus far into camp, Bolton has had to take on extra responsibilities with both Anthony Hitchens and Ben Niemann being banged up with injuries. He’s been up to the task, thus expectations have risen as quickly as Bolton’s 40 time.

The Arizona Cardinals made a very intriguing pick by selecting Zaven Collins in the first round. Collins is another versatile player that has plenty of skill in all phases of the defense: run stopping, pass coverage, blitzes, he does it all. Great instincts make up for a lack of long speed in his game, but questions arose around how much he could actually make an impact in Arizona.

With Chandler Jones and Isaiah Simmons already very serviceable at the position, it seemed like Collins would get bogged just by the sheer depth at the position. Instead, Collins has gone out and made a noticeable impact at camp. Collins is set to start at inside linebacker for the Cardinals first preseason game.

Ron Rivera has a history of developing young studs on the defensive side of the ball. He may have his latest opportunity to do just that with Jamin Davis. At Kentucky, Davis developed into quite the ballhawk at the middle linebacker position. He has great length and is a consistent tackles in open space.

However, he still has a lot of development to go. He is inconsistent in the trenches and needs to be better at weaving his way through traffic. That said, he has certainly impressed Washington’s coaching staff to this point and has earned the starting middle linebacker spot for his preseason debut.