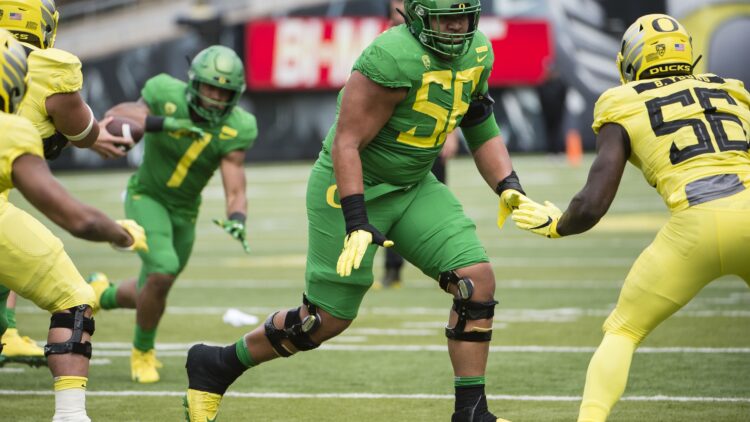 Penei Sewell is everything you want in an OT prospect. He has size, strength, and athleticism. His lateral movement is exceptional, and he uses a strong base to keep pass rushers in front of him. If there is anything not to like, it’s the fact that he may be playing a different position than he’s used to.

Seeing as Sewell sat out the 2020 season due to COVID, it makes sense for him to be eased into an NFL role. Because of that, the Lions have been playing him at right tackle rather than his usual left tackle. Head coach Dan Campbell has liked what he’s seen so far, but we’ll see if it’s enough to convince him to play Sewell at left tackle.

The Chargers made very big moves towards improving their offensive line this offseason. They signed center Corey Linsley, and they picked one of the top draft prospects, Rashawn Slater. Ultimately, many expected Slater to bump inside to the guard position due to his lack of size. However, Slater has earned some rave reviews from Chargers camp.

As mentioned, Slater is a bit undersized; however, that is probably the only knock you can make on him. He’s athletic enough to keep edge rushers in front of him, but he can still anchor down to stop interior defenders from bull-rushing him. This versatility should give Slater success in the NFL no matter what position he plays.

Unlike the first two players on this list, Christian Darrisaw opted to play during the 2020 college season. He performed very well for Virginia Tech, too. While the former Hokie was projected to go early on in the first round, the Vikings snatched him up at No. 23. In a vacuum, Darrisaw may be the best pass blocker in this draft.

Darrisaw possesses great length, and his technique is superb. The biggest advantage that Darrisaw has going for him though is experience. He was offered a starting position as a true freshman, and did nothing but improve over the course of three years. The Vikings also gain someone that is very proficient in zone run protection. The impact of Darrisaw will be felt early on in Minnesota.

Alijah Vera-Tucker was one of my favorite players going into this draft. He is the most versatile offensive lineman in the class, with experience at every tackle and guard position. It’s one thing to play every position, and another thing to be effective.

Vera-Tucker proved to be effective wherever he lined up. Like Slater, his size may ultimately force him inside to a guard spot. Luckily for the New York Jets, that’s been the plan all along. With Mekhi Becton manning the left tackle spot, Vera-Tucker is expected to spend much of his time at left guard. The two of them together could make for an incredibly talented duo moving forward.

The Bears went all in on the 2021 draft, and it earned them two players that have potential to be franchise cornerstones. Teven Jenkins is one of those two players, who will play at the left tackle position. Jenkins is explosive off the line, and his lateral movement is nimble for a player of his size.

Of course, the major red flag right now is health. Jenkins suffered a lower back injury during the 2020 season that forced him to shut down, and it seems to have flared up again. He has not practiced yet during training camp, but on Monday he was seen doing work on the sidelines. Matt Nagy is confident he’s on the right track, so I won’t doubt him yet.