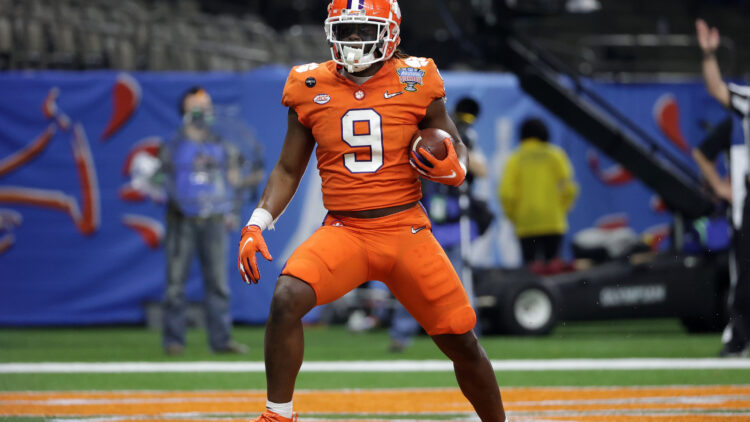 The Steelers needed someone to add diversity to their offensive game plan. Last year, the Steelers could not move the ball on the ground, so they take a chance with Najee Harris with their first round pick.

Harris is a very dynamic running back with a knack for finding the end zone. He totaled 30 touchdowns during his senior year at Alabama finished his collegiate career with 57 scores. Not only that, but Alabama used him much more in the passing game than in years past.

Mike Tomlin has plenty of experience with running backs that can catch out of the backfield (i.e. Leveon Bell), and the Steelers will certainly use that skill in a creative way. As long as personalities don’t get in the way, Harris could have a very successful tenure in Pittsburgh.

Throughout his four years at Clemson, Travis Etienne was one of the most intriguing player in college football. He burst onto the scene during his freshman year and averaged over seven yards per carry en route to 766 yards and five touchdowns. Similarly to Harris, he has developed into a very effective pass catcher and may be even better than Harris in this aspect.

While I think Etienne will have a solid NFL career, the gap between he and Harris may be noticeable in 2021. Etienne enters a Jacksonville organization that has a very similar back in James Robinson, and he took a concerning step back in 2020. The fact that Urban Meyer has already been playing with the idea of transforming him into a wide receiver doesn’t exactly bode well either. Of course, this may use be over-analysis of a great player, but at some point, coincidences are no longer coincidences.

The thing Etienne has going for him is familiarity; his QB is still Clemson teammate, Trevor Lawrence. Additionally, his skills should transfer well to the NFL. He has excellent acceleration, great cutting abilities, and is a decent pass blocker.

Here’s where the debate really begins. Michael Carter and Javonte Williams were the two-headed monster of UNC’s backfield for three years, and honestly, while they have different skill sets, the talent is there for both players.

Carter is sure-handed with the football, fumbling zero times over the past two seasons. He runs low to the ground and has great agility to avoid tacklers. He’s unafraid of contact, too. He is easily the best pass blocking RB in this class, and he has the ability to truck defenders when needed.

The Jets should enjoy having Carter on their team, but there is a reason he isn’t in the same tier as the first two RBs. Carter does not have the top-speed needed to break off big plays, and his ability to be a three-down back is unproven. New York appears to be ready for this with the acquisition of veteran back, Tevin Coleman.

Ultimately, the decision to put Carter above Javonte Williams didn’t have a ton to do with a talent discrepancy. Rather it came down to the fact that the Denver Broncos already have Melvin Gordon on their team. While he doesn’t have a clean injury history, Gordon’s ability speaks for itself. As long as he’s around, Williams will be fighting for touches in Denver’s offense.

Unlike Carter, Williams’ game involves a lot of speed. He’s also proven to be a very effective receiver and will be yet another weapon for Drew Lock to throw to. With only 366 carries in college, Williams also has plenty of time before the wheels fall off.

However, that lack of carries is a double-edged sword. Williams was a linebacker for most of high school and only transitioned to the running back position during his senior year. Therefore, he’s still fairly raw and needs to learn new ways to avoid defenders. Similarly, because of his defensive background, he tends to run at defenders instead of attempting to dodge them. If he can continue his progression with a clean bill of health, Denver has a very talented player.

Philadelphia found themselves a perfect complement to Miles Sanders in this draft. While Sanders is a powerful runner, he has never thrived as an elusive threat nor as a pass catcher. Kenneth Gainwell brings both of these to the table.

Gainwell opted out of the 2020 season, but he thrived in passing downs during the 2019 season for Memphis. He reeled in 51 of 61 targets for 677 receiving yards and on top of that totaled nearly 1500 rushing yards. In fact, Gainwell was a big reason why Antonio Gibson didn’t see the field more often that year.

That said, Gainwell only has one true year as a starter. That’s always a red flag and was certainly a reason he wasn’t selected until the fifth round as the ninth RB off the board. We also have to see how well he can play alongside Jalen Hurts.