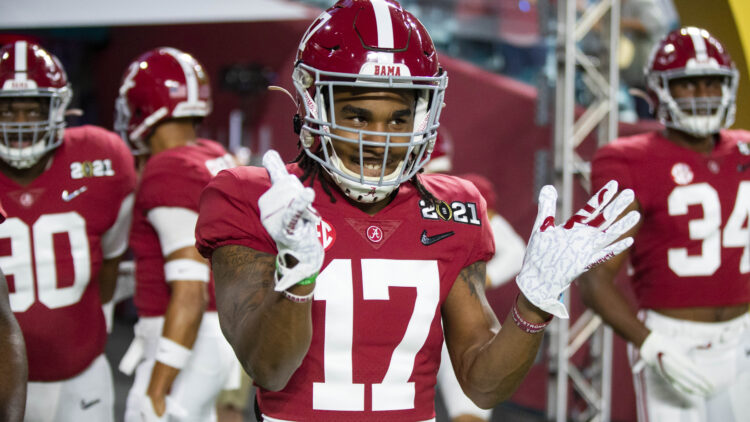 I said going into this draft that Jaylen Waddle would be the best wide receiver in the class. I think he proves it right out of the gate. Re-teaming with Tua Tagovailoa will be helpful to both of them, and Brian Flores will have a creative game plan to elevate both of them.

While DeVante Parker and Will Fuller aren’t the most exciting wide receivers to put next to Waddle, there are worse situations to be in. Waddle thrived in the slot throughout his career at Alabama, and he should get plenty of snaps there in this Miami offense. On top of that, this Dolphins squad should have their sights on the playoffs this year.

Another pairing of old college teammates, Ja’Marr Chase heads to Cincinnati and joins Joe Burrow. The duo was unstoppable at LSU in 2019, connecting 84 times for 1780 yards and 20 TDs. The numbers won’t be quite as astonishing in Cincy, but I expect the chemistry between the two to be similarly great.

I have Chase below Waddle for a couple reasons, though. First off, I don’t believe this year he will impact winning as much as Waddle can in Miami. Secondly, this team has a number of young receivers all trying to get as many targets as they can. As dynamic as Chase was in college, he may not be quite up to that level yet in the NFL, especially after sitting out of the 2020 season.

Devonta Smith’s NFL career is off to a concerning start. He was sidelined from practice on Saturday after a leg injury. One of the biggest red flags with Smith going into the draft was that his small frame would not allow him to be durable. If problems are already flaring up, that does not bode well for the future.

We like to stay optimistic on this site though, so let’s assume Smith remains healthy. He’s a deceptively strong player, and he doesn’t shy away from contact. His route running is some of the best in this class as well. We’re still going with the reunion theme too as Smith teams up with Jalen Hurts. Smith should be the WR1 if health isn’t an issue, and therefore should get plenty of targets.

For the time being, Green Bay has both Aaron Rodgers and Davante Adams motivated and ready to make at least one more run at a Super Bowl. The Packers needed to add a reliable weapon alongside Adams in the wide receiver room, and they did just that with Amari Rodgers.

Rodgers proved he could be a go-to guy in Clemson, and he should thrive in the slot among Green Bay’s receivers. If his quarterback is anything like the MVP that he was last year, Rodgers should play above expectations this season.

The Jets brought in a lot of new faces to change the culture in New York. One of the guys that should be instrumental moving forward is Elijah Moore. Moore has huge upside going into the NFL. His breakaway speed cannot be taught, and he plays much bigger than his size suggests.

One knock going into the draft was that he hasn’t shown much success as an outside receiver, but thanks to the free agent signing of Corey Davis, that is less of an issue in New York. Fellow rookie Zach Wilson could have a big year, and if he does, Moore will reap the benefits.