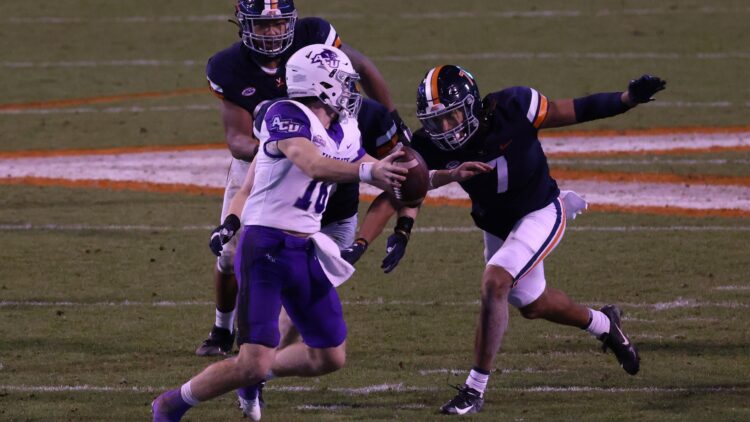 Okay, I’ll admit it. I’m a little obsessed with the ACC this year. I’m not sure if writing about them in three of my last five articles gave it away or not, but at least now you know, I guess? I promise there will be more diversity moving forward, but this conference is just too fun to talk about. That happens to remind me, if any readers out there have thoughts on the ACC, feel free to put them in the comments: Do you agree that it’s a fun conference? Am I delusional? Should I quit my day job and become an accountant? All of the above? Let me know down below.

As for now, let’s talk about the Virginia Cavaliers! The Cavs aren’t exactly a team that headlines the conference this year, but if there’s one thing they know how to do, it’s develop linebacker talent. Going into the 2021 season, they have a duo of linebackers that very well could walk across the NFL Draft stage next April. Virginia may have lost four linebackers following the 2020 season, but just like Shady, they’re back again with a strong group headlined by Nick Jackson and Noah Taylor.

Not only are Jackson and Taylor both very talented players, but they each bring a unique skill set to the field. Jackson plays the inside linebacker position extremely well, and he shows plenty of promise in pass coverage even if his instincts are inconsistent. In 10 games, he totaled a ridiculous 103 tackles; a total that was good for third in the conference, behind only Payton Wilson and Isaiah McDuffie, as well as sixth in the entire nation.

In addition, Jackson has done a great job throughout his Cavs career against the run. Many of his tackles last season came from putting rushers to a halt. If he can continue to develop his instincts and become more present in pass coverage, there is a chance he goes in the middle rounds of next year’s draft, should he declare.

As a yin to Jackson’s yang, Taylor is a more explosive player that excels at rushing the passer from the outside. His best trait is his ability to get around offensive tackles to blow plays up in the backfield. Taylor’s 2020 season was hampered by a back injury, but he still put together 44 tackles, including 8.5 TFLs, in nine games.

Over his two years as a starter, Taylor now has 20.5 TFLs and 9.5 sacks. He’s a behemoth at outside linebacker, standing 6’3 and 235 pounds. He’s always ready to run through a bigger blocker, and if he can find a way to disrupt plays as he did in 2019, he has the potential to be picked in the third or fourth round of the 2022 draft.

As mentioned, Virginia isn’t the belle of the ACC ball among the likes of Clemson, Miami, and North Carolina. However, similarly to Boston College, they have a lot of veteran players returning. None of Virginia’s players have the star power of a Zay Flowers, but it will at least help to have some continuity and familiarity.

Unlike Boston College, Virginia has one of the toughest schedules in the ACC, which at the end of the day probably holds them back from reaching their maximum potential. Even if Virginia loses some of their tougher games to Notre Dame, UNC, BYU, etc., if Taylor and Jackson perform well through the adversity it will only raise their draft stock. Time tells all, but the two linebackers seem to have a bright future ahead of them.