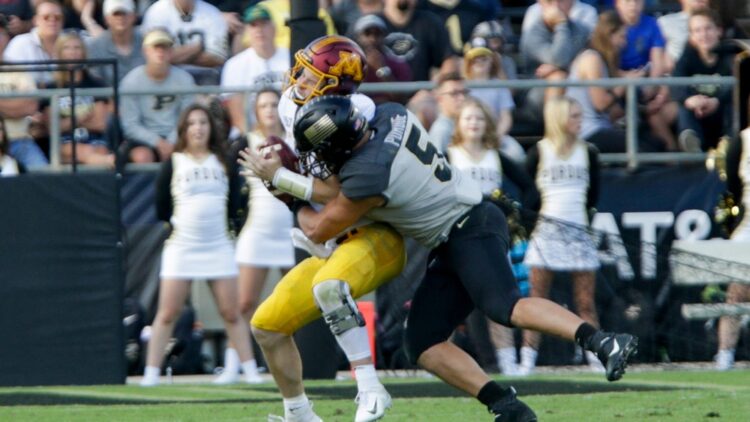 The Chicago Bears made the 2021 Draft count. They traded up to take a potential franchise QB in Justin Fields, and then traded up again in the second round to get one of the better OTs of the draft, Terence Jenkins.

By completing the first round trade for the rights to draft Fields, Chicago lost their 2022 first and fourth round picks. However, they still have five selections as of now to continue towards improvement. Here are a couple players I could see helping this team out of the second or third rounds.

Chicago has a solid defensive front going into 2021, but that may change in the next couple years. Both Akiem Hicks and Bilal Nichols will hit free agency in 2022, and the group is just generally becoming older and not bringing production that matches the money being handed out. A young, athletic lineman is what this group needs moving forward.

George Karlaftis needs to put together another productive season in order for his stock to rise out of the Day Three tier, especially after appearing in just three games in 2020. Through this fact alone, he may not even declare for the 2022 Draft in order to maximize his stock for 2023. That said, a magnificent season is absolutely in the cards for 2021.

Karlaftis broke onto the scene as a freshman and really never looked back for the rest of 2019. He finished the year tenth in sacks and third in TFLs in the entire Big 10: a conference synonymous with terrific defensive players. His speed and athleticism at 270 pounds is something rarely seen in a defensive lineman, and his motor is somehow even scarcer. Seriously, if it’s a random Tuesday, and you’re just bored of the typical Netflix show you’re watching, find some Karlaftis highlights. It’ll be far more entertaining.

As a defensive end, Karlaftis will first be looked at for his pass rush abilities, which are great. However, I think he can add even more value to an NFL team for his run defense. Because of his athleticism, it is hard to find a running back that can get around his long frame. He could even be used on the inside as a defensive tackle.

It is going to be very interesting to see what Karlaftis does in 2021, and if for no other reason than that, you should make sure to tune in for a game or two of Boilermaker football.

Chicago has a ton of unrest in their wide receiver room with Allen Robinson on the franchise tag and Anthony Miller seemingly always in and out of trade rumors. They could use another consistent player at the position for their new QB.

George Pickens would be a top prospect in this class if it were not for a torn ACL suffered this spring. Now, his 2021 season outlook is foggy at best, and his draft stock could plummet. There is potential that he could just wait until 2023 to declare.

Even so, if he is able to make a full recovery ahead of this draft, Pickens is still a player to look out for. At 6’2, the Bulldog is a long receiver on the outside, but he has a burst of speed to match it. His moves off the line are explosive and accelerates very quickly. If he can return for a couple games in 2021, and tandem of J.T. Daniels at QB and Pickens at wide receiver could produce eye-popping numbers and plays. Whether it be 2022 or 2023, Pickens is a player who will hear his name called to the draft stage at some point.