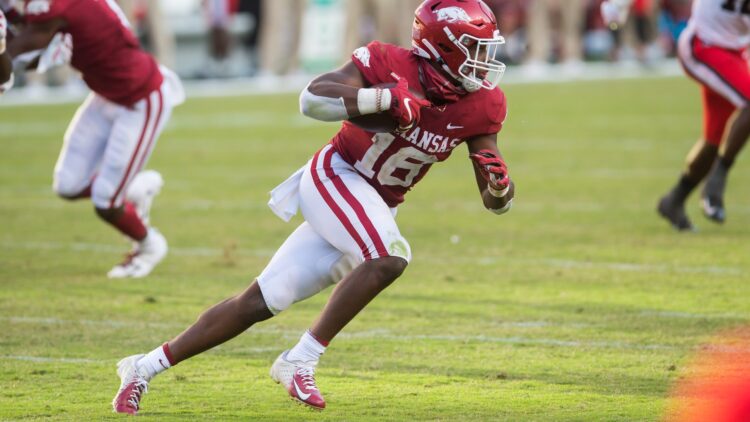 The Baltimore Ravens have one of the most dynamic NFL players in QB Lamar Jackson. The team got over the hump and won a playoff game in 2021, but in the end, the Buffalo Bills defense proved to be too much.

The most glaring issue? It really felt like Jackson just didn’t have a reliable WR1. Mark Andrews, Marquise Brown, and Willie Snead are nice pieces, but none of them ranked in the top-50 in receptions last year. Obviously, part of this is due to the fact that Baltimore wants to be a run-first team, but it’s clear that this team needs to get better in the passing game in order to be successful.

Baltimore attempted to fix this issue by drafting Rashod Bateman and replacing Snead with Sammy Watkins. This is all well and good if Bateman can revert back to the 2019 version of himself, but 2020 was a massive step back for the former Minnesota Golden Gopher. The poor performance probably has a lot to do with the fact that 2020, well, was 2020. The pick still carries a lot of risk nonetheless.

Additionally, Watkins has always been a much more effective WR2 than WR1 throughout his career and is only on a one-year deal. It’s also worth noting that Andrews is a free agent following the 2021 season, with Brown following suit after the 2022 campaign. We may be pointing to wide receiver once again as a position of need for this roster in next year’s draft.

Speaking of free agents, there are some major concerns on the other side of the ball too. Matt Judon is now a Patriot, and both Calais Campbell and Brandon Williams are set to be free agents next offseason.

Williams is a key part of Baltimore’s run defense, but the bigger issue is the pass rush. Judon and Campbell have been massive contributors over the past few years. Now, one is already gone and another may be on his way out. The Ravens will probably be looking for an edge rusher in the 2022 draft.

Arkansas hasn’t had a wide receiver drafted since 2013 when Cobi Hamilton was selected in the sixth round by the Cincinnati Bengals. Treylon Burks may not only end this streak, but he has a chance to be taken much earlier than Hamilton.

The Ravens’ issues with reliable wide receiver may end if they find a way to get Burks in 2022. The 6’3 Razorback has a surprising amount of speed to keep opposing secondaries honest. His burst off the line is exceptional, and he doesn’t have wasted movement in his routes. He makes every cut purposefully and with fluidity. Along with this athleticism, he also has the traits that you’d expect from a big receiver. He uses his length and size to bully smaller defenders and is terrific at catching contested passes.

Even with this diverse skill set, Burks is not the top receiver prospect going into the 2021 season. The biggest reason behind that? Drops. Despite having ridiculously large hands at 10.25 inches, Burks has a surprising number of drops. Many of these drops seem like they would be catchable, so hopefully the number trends downward this season. If he can get it under control and diversify some of his routes, there’s no reason to think Burks won’t have success in the NFL.

If the Ravens have found a solid wide receiver in Rashod Bateman, I believe they will focus on pass rushers. There are some quality players that most likely will be off the board when Baltimore’s turn comes. However, there is a chance that Nik Bonnito will still be around.

Bonnito is probably the fastest pass rusher in the class, and he seems like a Gregory Rousseau-type prospect. The redshirt junior is very explosive off the line, and this athleticism makes up for a lack of size. His seemingly endless motor allows him to keep these high intensity reps going late into games.

Obviously though, a lack of size in trenches brings some issues at some point. Bonnito can get caught by larger tackles, and he isn’t very effective when teams can send two blockers at him. Similarly, he leaves a lot to be desired in run defense too. Bonnito can be a bit of a one trick pony at times, but he is great at that one trick. If he improves his consitency in other areas, NFL teams will want him next year.