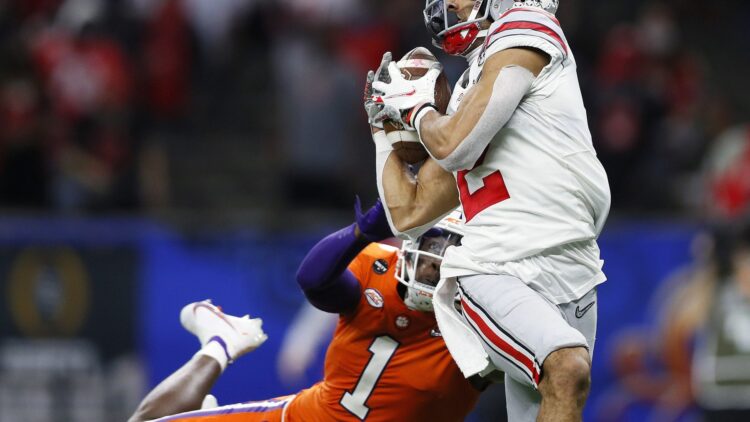 The 2021 NFL Draft may have just concluded, but it is never too early to start talking about the next cycle…right? Obviously, a lot can change over the course of 11 months, especially when those months include full college and NFL seasons. That said, you have to assume each NFL franchise has already begun looking ahead to next April. Over the course of the next few weeks leading up to NFL training camp, The Draft Team will be highlighting a couple prospects for each team to watch during the 2022 collegiate season. Today, to Joe Johnson’s delight, we begin with the Minnesota Vikings.

Adam Thielen is officially on the wrong side of 30. He is under contract through 2024 and may need to take a step back in the coming years as he approaches his mid-30s. Justin Jefferson has already proven that he can take on a large portion of the targets, but it never hurts to have a couple reliable receivers. This is especially true if the Vikings plan to eventually move on from Kirk Cousins in favor of a younger QB.

Chris Olave is a very talented receiver at Ohio State and plays a similar role to what Justin Jefferson had at LSU. He’s had a great QB in Justin Fields, top-tier receivers around him, and a creative coaching scheme. Olave enters his senior year looking to be a first-round pick in the 2022 draft and has all the talent to accomplish that goal. He is comfortable at almost any receiver position whether that be the slot or on the outside.

Ohio State has turned Olave into a top WR by playing to his strengths. He works very well off of screens as his elusivity leads to a ton of YAC and has a great burst off the line of scrimmage. His cuts are made with purpose on routes, and he changes speeds very quickly.

At 6’1, Olave may be a bit smaller than other receivers, but he plays a physical brand of football. His embracement of physicality helps him run through defenders and will hopefully help him end a bad tendency: drops. As a lighter guy, he is liable for taking big hits from linebackers or strong cornerbacks. The ball is a little too easily jarred from his grasp in these scenarios.

This weakness is amplified by the fact that he is best suited for catching balls in slants or curls that take him towards the middle of the defense. He tends to struggle on go routes and cannot reel in deep passes. That may be as much a knock on Fields as it is on Olave though. We’ll have to see what happens in 2021.

Of course, the Vikings’ need for a wide receiver may depend on the production of third-round pick, Ihmir Smith-Marsette. Minnesota is reportedly giving him a shot at the WR3 role, and should he thrive there, the Vikings have very little need for Olave.

If the Vikings do not need to add depth to the WR room, safety may be a position to keep an eye on. Anthony Harris is gone, and Harrison Smith is a UFA next offseason. Xavier Woods’ signing fills an immediate need, but Minnesota is still looking for a long-term solution.

Kyle Hamilton is a very similar player to former Norte Dame teammate and current Cleveland Brown, Jeremiah Owusu-Koramoah. Hamilton is another oversized safety at 6’4/220. He is listed as a safety, but he can play all over the field. In addition to his pass coverage skills, Hamilton has shown great instincts in run-stopping and even as a blitzer against the pass. It would not be surprising to see him transition to a little more linebacker this upcoming season, similarly to JOK.

If Hamilton has any flaw, it is his lateral quickness. He doesn’t keep up well with receivers off the line of scrimmage and can’t sharply change direction in coverage. Similarly, this leads to an occasional tendency to overcommit on tackle attempts, and elusive receivers can make him miss fairly easily. All of that said, again, he’s still 6’4. Hamilton’s extreme length can make up for a lot of his flaws, even when he’s forced to arm tackle.

We are still a long way off even from the 2021 season, but Hamilton looks like one of the top safety prospects in this class early on. Even if he transitions to playing more linebacker, he has all the looks of a first-round pick. Obviously, that can change in another season, but if Hamilton can continue to develop his tackling and ability to break up passes, he is a great pickup for any secondary.