What Should We Expect From DJ Uiagalelei This Year? 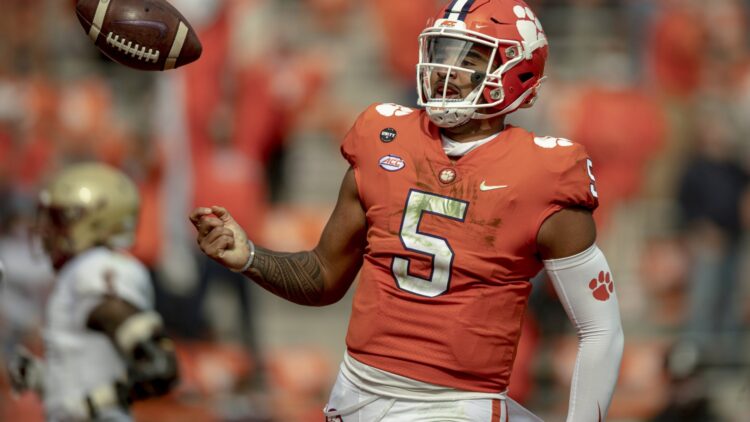 Trevor Lawrence has been the gold standard of college football ever since he entered the Clemson program in 2018. With a 38-2 record, three CFP appearances, two national championship game appearances, and a national title, you can’t get a much better résumé than Lawrence’s.

As Lawrence departs for the NFL, there is a gap to be filled in the Clemson QB room. Normally there is a decent amount of uncertainty when a player of that stature leaves a program. This isn’t a normal situation though. The Clemson Tigers believe they already have a future star that, as head coach Dabo Swinney puts it, could make Trevor Lawrence look “normal”. That player is, of course, sophomore DJ Uiagalelei.

Many people have already thrown Uiagalelei’s name into the Heisman race this fall. Expectations abound for this young man as he steps into the starting role for a team that has seen one of Deshaun Watson or Trevor Lawrence for each of the past six seasons. Should we have such high expectations from the first-year starter though?

Uiagalelei went to Clemson specifically so he could learn from Trevor Lawrence, and in the two games he started during 2020, it looked like he learned a lot. The Tigers went 1-1 with him under center as they defeated Boston College and lost in 2OT to Notre Dame. The freshman completed 68.6% (59/86) of his passes and tossed four TDs without throwing an interception during his two starts. In addition, he scored twice as a rusher.

With these two starts and Clemson’s spring game, Uiagalelei showed he has the makeup of a star. His cannon arm and sharp decision making were on full display as Clemson erased an early deficit against Boston College. He showed incredible composure the following week as he traded haymakers with Ian Book and an explosive Notre Dame team.

On arm talent alone, he may have Lawrence beat already. This makes sense as in addition to being Clemson’s starting quarterback, Uiagalelei is a highly-rated baseball recruit. He has a rocket and put it to great use on the first play of OT against Notre Dame. Powell not only runs a great route here to free himself up, but Uiagalelei puts a fastball perfectly into the window where only his receiver can get it.

That said, the heater gets a little too hot at times. Uiagalelei does make some of the mistakes typically seen in young players. First and foremost, he sails throws over his receivers sometimes. At 6’4-6’5, the release point of his ball is going to be higher than some other QBs, but he needs to get his throws under control.

At the end of the day, we do need to remember that Uiagalelei is essentially entering his first year of college football. Clemson quietly has to replace a lot of the players that both Uiagalelei and Lawrence spent time targeting, too. All three of Travis Etienne, Amari Rodgers, and Cornell Powell are in the NFL now.

During his aforementioned starts, 47 of Uiagalelei’s 59 completions went to these three players. Of course, Dabo Swinney has always put together a great offensive game plan, but his young QB won’t be able to ease his way into the season as Clemson’s year starts off with a heavyweight matchup against Georgia. We’ve talked about JT Daniels in a previous article, but Georgia is expecting some great things from their QB this season too.

Obviously, much of the critiques with Uiagalelei are fixable things that should come with experience. It just might take some time to stop the occasional sailed ball or pass to the wrong side of his receiver. Clemson has an idea of what they’d like to see improve upon as well. During the spring game, Swinney specifically mentioned that he wants Uiagalelei to become better at clock management.

There weren’t a ton of instances where he had to run a 2-minute drill during 2020, but in the spring game, there were a few times down the stretch where he was unable to lead his receiver out of bounds on his throws. This isn’t a huge deal in that practice setting, but in a live game, an inability to manage the clock could be the difference.

Uiagalelei’s raw talent is there; however, he certainly has a few things to fine-tune before we can call him a Heisman favorite. While Clemson should win the ACC off their talent, it would not be surprising at all if they lost a game or two that they would have won in past years. The day may be coming where Uiagalelei puts his name among the Clemson greats, but we need to give him some time before making that an expectation. He is certainly a name to watch for the 2023 NFL Draft though.